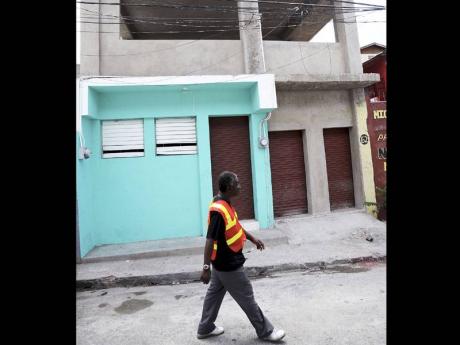 One of the buildings being renovated on John's Lane in downtown Kingston as that area comes alive. - photos by Norman Grindley/Chief Photographer 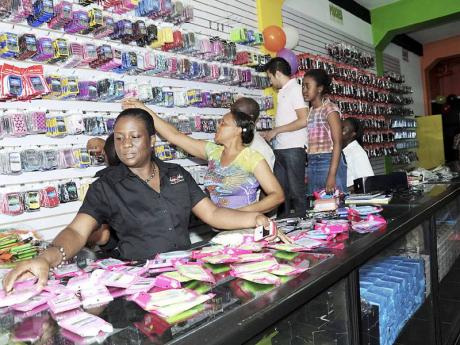 Nadine Allen-Ho (forefront) and her employees arrange goods in the new Soo-Ho Phone Accessories, which opened its doors on John's Lane last week
1
2

An amazing transformation is taking place to the face of the section of John's Lane from Sutton Street to East Queen Street, in the heart of downtown Kingston.

New businesses are opening, buildings are being constructed while others are being given a facelift as the small stretch of road underscores the rebirth of the city that is now well underway.

That section of the lane, which takes less than five minutes to walk from one end to the next, already houses a barber shop, a pharmacy, a bike-parts shop, a restaurant, a bar, an optical repair shop and a number of other businesses.

Now Soo-Ho Phone Accessories has been added to the entities in this busy commercial area.

The sleek-looking shop, which opened its doors last week, stocks accessories for all types of phones. Its manager, Nadine Allen-Ho, said prices are competitive.

"This is the expansion of a business that has operated on Law Street, also downtown Kingston, for the past 15 years," Allen-Ho told The Gleaner.

She said with the renewal that is now taking place in downtown Kingston, the time was right for the new branch.

"When you are operating in the business district in downtown Kingston, it is never a guess that you are going to be successful," said Allen-Ho as she welcomed shoppers into the business for the opening day.

Metres away construction was well under way for new office buildings at premises occupied by attorney-at-law Michael Lorne.

He told The Gleaner construction should be completed shortly.

The changes are welcomed by persons who live or work around John's Lane. One person boasting loudly about the developments.

"John's Lane soon look better than King Street," declared the man who described himself as a regular visitor to a bar in the lane.