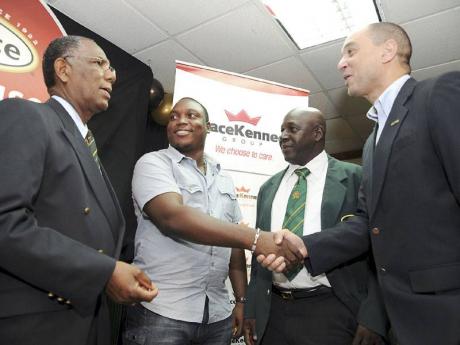 GraceKennedy CEO Don Wehby says his company is in the process of reviewing a Jamaica Cricket Association (JCA) proposal regarding player retainer contracts with a view to signing on.

The proposal speaks to having national senior cricket players being contracted for the duration of the season in a manner similar to that of players who represent the West Indies and Barbados.

"I have been having discussions with the (JCA) president (Lyndel Wright) over the past few months and a draft proposal was sent to me recently," said Wehby.

"We are now going through the details to see how quickly we can implement it so that our cricketers can, by and large, earn a living while practising the sport."

Wehby was speaking at a luncheon hosted by his organisation yesterday at their main office on Harbour Street, Kingston, in honour of the national senior cricket team, who were last month crowned regional four-day champions for a record fifth-straight year.

The idea of a retainer contract was first bandied about by Wehby last year when speaking at the JCA's annual awards ceremony. he highlighted the need for such an incentive for players.

This was weeks after the Barbados Cricket Association, following the lead of the West Indies Cricket Board, offered retainer contracts to 15 players, including Dwayne Smith, Ryan Hinds, Dale Richards and Tino Best.

"I think it is well overdue and is a move in the right direction," said national coach Junior Bennett.

"If there is one reservation I have right now it is the criteria where it is limited to players 18 to 24 at the moment, but I am confident that all parties involved will look at it in greater detail.

"This is so because these players will throughout the course of their duties need guidance and assistance from senior players," noted Bennett.

"It is a welcome gesture because as Wehby quite rightly pointed out cricket is no longer a game of fun it is a career, you have to look at development," said Bennett.

"For example, once a player can get up in the morning and know you are getting paid you can afford to train the entire day.

"When you have to go to work and come back to training it is going to cut into a player's training time so it is a welcome move," he pointed out.

National captain Tamar Lambert said the move should improve the welfare of players.

"It is difficult to play cricket and really don't have a full-time job, especially in Jamaica so it's good to know that at the end of the month as cricketers we will have something to look forward to," said Lambert.

"It would also make players more willing to stay back and play in Jamaica at the end of regional competitions, which would help to develop the standard of play.

"I hope it comes through and that other companies will come on board," Lambert added.