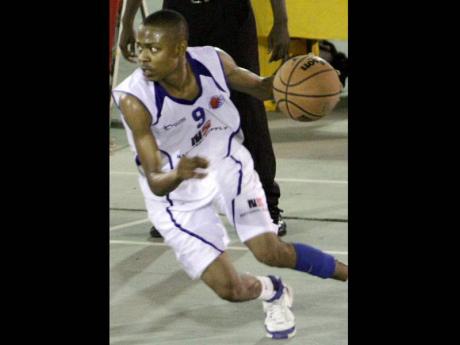 Javon Bailey is set to tackle an emotional situation when the Runnin Rebels take on his former club Urban Knights in today's feature match of the Flow/National Basketball League (NBL) at the National Stadium courts starting at 6 p.m.

Bailey, who led the Knights to back-to-back titles in 2008-09, made the switch to the Rebels at the end of last season. The 24-year-old point guard, who was recruited out of St Catherine High School by Knights in 2007, said he is looking forward to playing against his former teammates.

"There is going to be a lot of emotions in tomorrow's game (today)," said Bailey. "It is going to be difficult for me playing game against the Urban Knights players because I was playing with them for five years and the coaches there have helped me to become a better player and individual," said Bailey, who is also a national representative.

Runnin Rebels, who were beaten by the St Georges Saints in their last outing, have one win and one defeat and Bailey admits that his team is anxious for a victory.

"However, at the end of the day it is all about basketball and we need to get this victory," he said.

"I think that we will be the favourites to win the game, but we are not going to take them lightly because I know that they are very good all-round," Bailey added.

Along with Bailey, the Pete Matthews-coached Rebels will be looking to national representative Kemar McLeish, Kemo Gordon and Omari Green to lead them to victory.

On the other hand, the Knights will be seeking their first win of the season, this after their opening game against defending champions Tivoli Gardens was rained out last week.

Kevin Alexander, manager of the Knights, said: "This is our first game and we are confident that we can start on a winning note.

"I also believe that once we rebound the ball and play tight defence and limit their scorers from scoring freely, then we should be able to get the victory,"

In the second game of the double-header, last year's beaten finalists, Majesty Legends, who are still without a victory from two games this season, will battle Portmore Flames at 7:45 p.m.