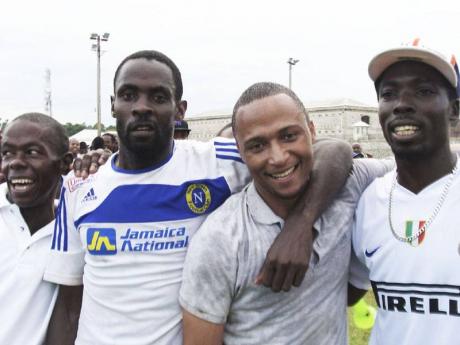 Victory was sealed at the sudden death stage when the 12th penalty taker, Rivoli's captain Fabian Gordon, sent his kick over the crossbar. It was the only blot on an otherwise perfect penalty take, which saw the first five kickers from each side scoring.

His miss triggered a wave of celebrations from New Green supporters, some of whom scaled the perimeter fence to lift up coach Andre Swaby.

Swaby, who is recognised as the face of the team given his role as coach and chief organiser, was at a loss for words.

"Words cannot describe how we feel ... what this means for New Green and Manchester. We've been at it for the last eight years," he said.

His goalkeeper, Levar "Dads" Williams, was perhaps the fitting hero of the day as even though, like his Rivoli counterpart Marlon Henry, he was a sitting duck during the penalty shoot-out, Williams stopped no fewer than three dangerous attempts on goal during open play.

The best of them was his second half dive, moments before the equaliser, to push wide a torrid left-footed drive from Garfied Reid that had evaded the wall and looked on course for goal with a deadly late swerve.

Earlier, New Green, limited to counter-attacks all afternoon, held on to their 1-0 lead from the Brooks Park first leg - four days before - for 85 minutes before dreadlocked Dwayne Hunter scored to ensure there would be a dramatic finale.

The game then became an even affair as New Green was forced to let go their defensive posture.

However, their spectators who occupied an entire section of the stands, remained pretty vocal, most loudly recounting New Green's 4-2 triumph over another top St Catherine team, Meadows, in the semi-finals.

South Central Confed chairman, Dale Spencer, disclosed that a special presentation of trophy and prize money will be handed over to New Green in Mandeville later this week.