So close, but so far for Boys' Town 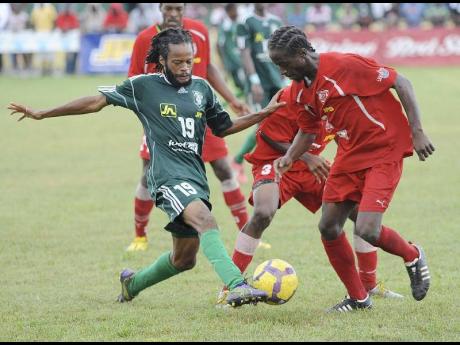 For the second consecutive campaign, Boys' Town fell just short on the final day of the season to claim their fourth national league title and first since 1989.

The Red Brigade registered a 3-0 victory over Humble Lion at Effortville Community Centre in the final round of the 2011-2012 Red Stripe Premier League season. This, however, proved to be an effort in futility, as leaders Portmore United got the all-important point they needed after playing to a 1-1 draw with Waterhouse at Ferdie Neita Park.

The result saw Portmore top the 12-team table with 67 points, with Boys' Town a point adrift on 66. Portmore had entered the fourth round, which consisted of five games, with a 10-point lead.

Andrew Price, who is celebrating 10 years at the helm of Boys' Town, praised his team's effort.

"I can't fault my team for an honest effort for the entire season," Price declared. "My team played with their heart today; I think they played very well and we just came up a little bit short."

He added: "We knew that we were up against it because we knew that the other result had to go in Waterhouse's favour, and it didn't do so."

Price blamed failure to pick up maximum points in some of their home games for them falling just short in the end.

Boys' Town did not settle down in the game before news came in the third minute that Portmore were leading.

This saw Humble Lion seize the ascendancy and they came close to taking the lead in the 13th minute when Omar Walters was allowed to turn in the area and get off a shot, which Boys' Town's custodian, Kirk Porter, had to dive well to his left to parry wide.

In the 18th minute, it was announced that Waterhouse had equalised and the Red Brigade immediately reacted to the glimmer of hope. Marvin Morgan attempted an acrobatic overhead kick from eight yards out, but Humble Lion's keeper, Garth Heron, was well positioned to effect the save.

Boys' Town were not to be denied a first-half lead, and the breakthrough came in the 41st minute. Kearn Binns did brilliantly to get by his defender on the left flank, before picking out an unmarked Rafeik Thomas in the middle of the area, who calmly side-footed into the far corner.

Boys' Town were not done there, however, and were gifted a second goal in the 44th minute courtesy of a defensive mix-up, which saw the defender leave the ball for Heron. Morgan pounced and rounded Heron, before firing into the empty net.

Boys' Town went in search of more goals in the second half, but only managed to convert one of the numerous chances they created. The third goal came in the 68th minute when Morgan's delightful chip was easily headed in by Thomas.

Humble Lion's coach, Lenworth Hyde Sr, was disappointed on missing out on the opportunity to finish third, as his team ended fourth on 57 points. This is three adrift of Waterhouse (60).

"If we had won the game we would have finished third, so that's the disappointing factor," Hyde disclosed.

"We didn't want to lose the last game at home, as we wanted to finish the season on a high, but it didn't happen today," he added.

Summary of final-round matches in the 2011-12 Red Stripe Premier League on Sunday: