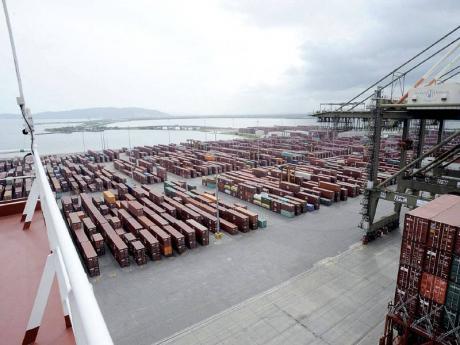 The Port Authority of Jamaica (PAJ) has identified private-sector partners for two massive projects - one of which is at the centre of a dispute with the overseer of public contracts - but says it is too early to supply details on what the ventures entail.

The port operator said, however, that the deals being negotiated separately for development of the Gordon Cay container trans-shipment hub and Fort Augusta container terminal will not derail plans for the privatisation of the port.

Shipping company CMA CGM of France made an unsolicited proposal for the Gordon Cay project, while China Harbour Engineering Company (CHEC) has put forward a proposal for Fort Augusta.

"The Port Authority's position is that the developments for which you have enquired are in preliminary stages and therefore we are not able to offer informed responses at this time," Kimberley Stiff, assistant vice-president - communications marketing, told Wednesday Business.

The Port Authority was added to the official list of state assets up for divestment under the Golding administration.

Stiff said the partnerships being negotiated would not have an impact on the privatisation plan, which potentially includes floating the state entity on the stock market.

Stiff said the plan to list PAJ was in the preliminary stages.

Another Chinese company, Pan Caribbean Sugar Company (PCSC), the owner of Frome, Bernard Lodge and Monymusk sugar estates, will be marketing its own sugar internationally and will likely need access to port facilities, because the Reynolds Pier in St Ann is only configured to handle the current pooling arrangement under which Jamaica's sugar is exported.

As to whether either of the two development projects will be designed to facilitate a port facility for PCSC, the PAJ said the sugar company "has not approached us".

For the financial year ending March 2012, the Port Authority had projected revenue of J$14.9 billion, while its fixed assets and investment properties was estimated to account for just over J$48 billion of the J$49.9 billion in non-current assets, according to the Ministry of Finance's latest Public Bodies Report.

And capital spending was budgeted at J$3.6 billion.

Minister of Transport, Works and Housing, Dr Omar Davies, who updated lawmakers on the two port projects in late April, said Cabinet in August 2011 approved the signing of a non-binding memorandum of understanding to facilitate the undertaking of studies - at no cost to the government - to assess the feasibility and viability of the CMA CGM proposal.

CMA CGM proposes to either renovate an existing section of Gordon Cay and/or add berthing capacity adjacent to Gordon Cay to accommodate large 'Super Post Pananmax' vessels and facilities for trans-shipment of cargo.

The French shipping company would then use the facility as its hemispheric hub, Davies said.

PAJ was also given the go-ahead to enter into a non-binding agreement with CHEC.

The Office of the Contractor General (OCG), headed by Greg Christie, has told the government it was not in agreement with the direct negotiations with investors in relation to the Gordon Cay and Highway 2000 projects, and that they should be subject to competitive tender.

In a statement last week, the office argued in respect of CMA CGM's proposed development of the Gordon Cay trans-shipment hub that "the GOJ will be leasing lands for between 25 and 35 years, and the prospective investor will be required to undertake the development, and will enure revenue which, it is assumed, will be based upon certain equity allocations which will be associated with the operation of the hub".

Christie contends that the assets should have been advertised.

"It is the OCG's considered opinion that if the GOJ had taken that route, it would have been far advanced, by now, in securing a preferred bidder, which, at the end of the process, may have very well been CMA CGM," the contractor general said.

He said the government has not provided the OCG with any information or documentation regarding the development of the Fort Augusta container terminal, and that his office has no institutional involvement in that project.