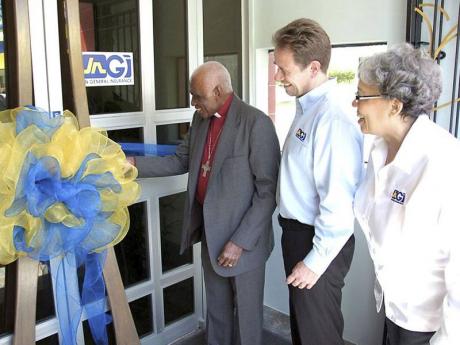 The Rev Dr Garnet Brown (at door), a customer for 55 years of JN General Insurance Company (JNGI), formerly NEM Insurance Company, cuts the ribbon to open the company's refurbished offices in downtown Kingston, with JNGI General Manager Chris Hind and JNGI Assistant General Manager Alicia Browne at his side. The name change from NEM to JNGI was finalised Tuesday, May 1.

Butterfield Bank has agreed to sell its Barbados subsidiary to First Citizens Bank Limited of Trinidad & Tobago, in a deal worth around US$45 million.

Butterfield is based in Bermuda. It is the oldest and second-largest bank in its home market.

Pending regulatory approval, the sale is expected to be completed during the third quarter of 2012.

First Citizens has assets of almost US$5 billion and equity of over US$800 million.

"This transaction confirms that First Citizens is well on course in terms of its strategic direction, particularly as it relates to acquisitions and regional expansion," said Larry Howai, the chief executive officer of First Citizens.

"This is certainly a win-win situation for both organisations, and what is most rewarding is the fact that the customer wins."

The bank, which provides retail, premium and business banking services, had assets of BDS$617 million (US$308 million) and customer deposits of BDS$540 million (US$270 million) at the end of 2011.

"Since entering the Barbados market in 2003, Butterfield has made good progress in improving and expanding our banking services on the island, and we have built a loyal customer base," Kopp said.

"This divestiture, the gain on which will be finalised on closing, is consistent with our strategy to simplify our operating model and focus our resources and capital on a smaller number of businesses where we have scale and competitive advantage."

Butterfield Barbados was established in 2003 through acquisition of the Barbados assets of the Mutual Bank of the Caribbean Inc, then a subsidiary of The Barbados Mutual Life Assurance Society.

Butterfield Bank also operates in The Bahamas and Cayman Islands.