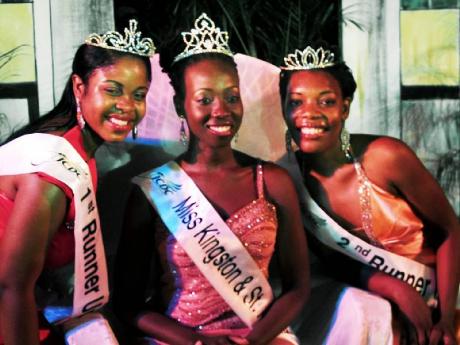 Against a background of pleasantry, a new Kingston and St Andrew Festival Queen was crowned on Sunday at the Louise Bennett Garden Theatre. She is 25-year-old Rasheen Roper, a teacher of English and a graduate of the University of the West Indies.

Roper, along with first and second runners-up, 19-year-old Chris-Ann Thomas and 18-year-old Jamelia Simpson, not only emerged victorious from the field of nine contestants but also walked away with all the sectional prizes.

After coronation, with congratulations still swirling around, an overwhelmed Roper spoke with The Gleaner.

"It is an overwhelming feeling. I am excited and am anticipating my role as the 2012 Festival Queen of Kingston and St Andrew," said the past student of Ardenne High School.

She explained that one of her goals is to go into training for the upcoming National Festival Queen Coronation. The new queen is also aware that her title comes with responsibility and she plans on executing her duties to the best of her ability.

Earlier, the lengthy event-filled occasion got off to a familiar start, the singing of Jamaica's National Anthem, and an official welcome by Festival Queen Committee chairperson Valerie Briscoe.

She described the nine contestants as beautiful and talented. In addition to thanking her team and the numerous sponsors, Briscoe also noted that participants over the years had learnt lifelong lessons as a result of their participation in the competition.

And the contestants made their first of several appearances. It was in the form of an opening number choreographed by Barbara McDaniel.

In their second appearance, the contestants vied for the sectional prize of Best Performance. In front of a backdrop boasting flora and fauna, the contestants commenced their battle for supremacy in the performing arts and a place in history. Their tactics varied. Through the audience, to the front of the stage, wearing costumes that reinforced their characters, they recited their mainly original pieces addressing various social issues. However, except for Roper who danced Chain to Change, poetry was the popular medium.

Afterwards, the winner was announced. There was no sound of surprise from the partisan audience. It was a tie; Roper and Simpson were thought, by the judges, to be worthy of the trophy for the Best Performance. Simpson's selection was titled Visa Saga.

Simpson also received prizes for being the Most Congenial and the Most Culturally Aware contestant, while Roper was considered to have the Best Poise.

Chris-Ann Thomas' poem, 'Everything Must Go', was awarded the prize for The Piece Best Represented Path.

The ladies made their final group appearance between six poles bearing flags in black, green or gold. They wore evening gowns from Angella's Boutique. Each was presented with a rose while being serenaded by vocalist Angel Smith. Some time after, the top five were announced.

The five reappeared for their onstage interviews. Subsequently, the final three were revealed, but not before outgoing queen, Krystle Daley, said her goodbye.

Beside Smith, students of Jesse Ripoll Primary School, Mojo Earl, Clan Carthy Primary School and Roy Rayon added colour and contrast to the evening's entertainment. Fab Five was the backing band. The programme was marshalled by Master of Ceremonies Norma Brown-Bell, who was also credited for training the ladies in speech and diction. The theme for the show was the tried and proven 'Jamaican Woman - Shaping our Culture'. The event was organised by the Jamaica Cultural Development Commission.