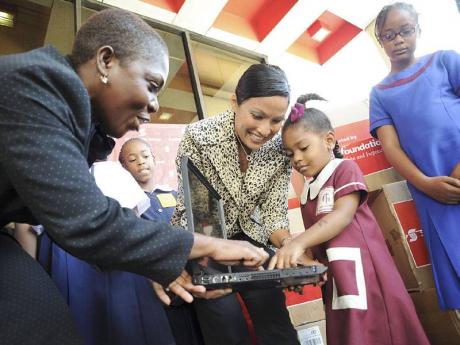 Joylene Griffiths Irving (left), executive director of the Scotia Foundation, and Monique Todd (centre), vice-president - marketing, public and corporate affairs, make a presentation to Rebecca Grant (second right), student of Higholborn Street Basic School, while other students look on during a handover of 113 computers to 50 schools by Scotia Foundation and Camara at the Scotiabank Centre in downtown Kingston yesterday. - Ricardo Makyn/Staff Photographer

Euphoric may be an understatement in describing the reactions of students from the Wesleyan Holiness Basic School in Fruitful Vale, Portland, as they were launched into the age of technology on receiving two computers from the Scotiabank Jamaica Foundation.

Wesleyan Holiness Basic was among 50 schools across the island that received a total of 113 computers from the Scotia Foundation. Many of these schools did not have computers before.

Most recipients are primary schools, however, several basic, all-age, and junior high schools, along with one skills-training centre, were included.

The computers were transported to these schools following a brief handover ceremony at the Scotiabank Centre in downtown Kingston yesterday.

Pauline Francis-Gray, a teacher at Wesleyan Holiness Basic, described the community of Fruitful Vale as a poor farming area where the majority of parents are unemployed.

"There are not even landlines, and children do not have computers, which are needed to become educated in the field of technology," she told The Gleaner.

It was because of this need this that Francis-Gray decided to write multiple letters to various organisations asking for assistance.

"Scotiabank was the only one to reply, telling us they had some computers for us. They came and installed them last Wednesday, and I must say, the children were so happy and enthused because nothing like that has ever happened in this part of the parish. It's like a dream come true!" Francis-Gray exclaimed.

During the ceremony, Joylene Griffiths Irving, director, corporate social responsibility of Scotiabank, and executive director of the Scotia Foundation, said: "We have annually donated computers, usually in September, but never at this magnitude. We have taken the approach to give so many because of the partnership with Camara, and also as one of our ways of observing Jamaica 50."

The Scotia Foundation purchased the computers from and engaged the Camara Jamaica Foundation (CJF) to ensure that the computers would be used optimally by the selected schools. CJF is a non-profit social enterprise that uses technology to improve education.

"These computers have been transformed into educational tools as they were loaded with a range of software to teach mathematics, numeracy, and literacy," said Karl Gaynor, CEO of CJF.

Griffiths Irving also explained that the computer grant was one of several significant activities the Scotia Foundation would be carrying out to commemorate Jamaica's observation of 50 years of Independence. Later this year, 50 students will benefit from bursaries and grants from the Scotia Foundation.