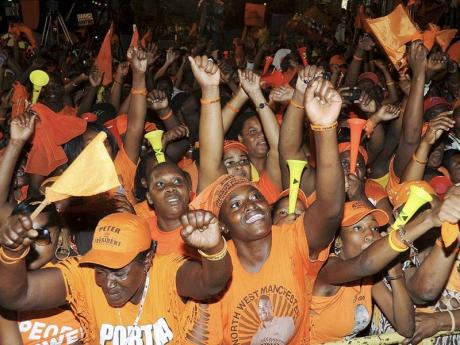 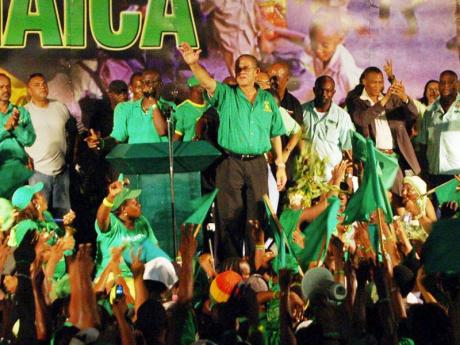 Bruce Golding, leader of the JLP and Russell Hammond, candidate for the central Westmoreland seat hug as they wave to party supporters during a campaign meeting in Savanna-la-Mar. - Dalton Laing Photo
1
2

The minister with responsibility for electoral affairs, Phillip Paulwell, says special efforts will be made in the new parliamentary year to have campaign-financing legislation put in place.

Paulwell, who is leader of government business in the House of Representatives, told The Gleaner yesterday that the Government views the passage of the legislation as a priority.

"We will be identifying special resources within the ministry's budget to have the legislation drafted," Paulwell said.

The minister said retired drafts persons would be utilised in crafting the proposed legislation.

Paulwell has committed to taking a submission before Cabinet as soon as the Electoral Commission of Jamaica furnishes Parliament with a supplementary report on campaign financing.

The issue of campaign financing has been again thrust into the limelight following a confiscation order issued by the Supreme Court in The Turks and Caicos Islands.

The documents list former prime minister, P.J. Patterson, West Portland MP Daryl Vaz, as well as the People's National Party (PNP) and the Jamaica Labour Party as beneficiaries of campaign contributions from David Smith's fraudulent investment scheme, Olint. Only Vaz has confirmed receiving the funds, while Patterson has denied collecting any money, and the parties have stated that they would have to carry out further investigations.

Paulwell said there was greater need for transparency in the way political campaigns are financed.

"From the time of Trafigura, it has become quite clear that we can no longer continue in the manner in which we have operated over the years," he said.

Trafigura, a Dutch firm that had been contracted to lift oil on Jamaica's behalf, had made a campaign donation of $31 million to the PNP in 2006.

The Dutch authorities are probing a bribery case against Trafigura Beheer.