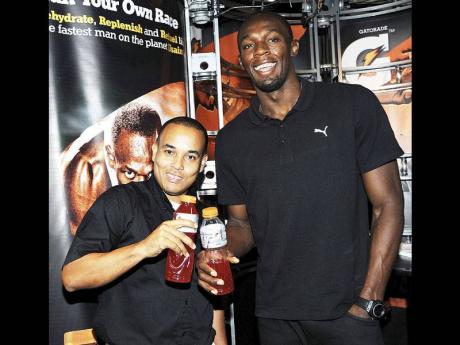 Sports-themed food and beverage manufacturers, Gatorade, has chosen the world's fastest man, Usain Bolt, to be the face of its latest global campaign.

The double sprint world record holder is believed to be perfect to lead the company's campaign, given his global appeal and ability to demonstrate through his performances what the product is capable of doing.

Bolt, who has been affiliated with the brand for the past four years, will be the main figure in the company's advertisements that will be communicated via print and electronic media across the over 80 countries that Gatorade, which is manufactured by PepsiCo, is distributed. A 30-second advertisement, which was filmed locally, will show Bolt training and how he rehydrates with Gatorade.

"What we are exceptionally happy about how that one campaign is going to be communicating him (Bolt) across the globe," Carlo Redwood, head of marketing, Pepsi Cola Jamaica, declared at the campaign's launch yesterday at Usain Bolt's Tracks and Records. "So it is not going to be him (Bolt) with any other superstar, but him by himself being featured in every single market across the world."

"G Series is a brand that has been rolled out across the world. We haven't launched it in Jamaica as yet, but we will be doing so very soon," Redwood revealed. "Bolt is a huge personality and the brand is a powerful brand across the world. It is really not only to help with the awareness of the brand, but communicating the functional benefits of the brand, because it is a pretty established brand, but having a brand like Bolt enhances the popularity."

The 100m and 200m Olympic champion, who will be looking to defend his titles in London this summer, is pleased with the partnership that has been forged between himself and Gatorade.

"Four years is a long time and we have been working well together; everything has been going good," Bolt disclosed. "I have learnt a lot about hydration working with them (Gatorade), so it has really helped me also in my track and field career."

The sprint sensation believes his affiliation with the brand is only natural, given the global appeal of track and field.

"As they explained, I am one of the few athletes that globally everybody recognises," Bolt shared. "A lot of people don't watch football in certain countries, and basketball, but I think track and field is global and that's why Gatorade chose me to be the face of their global campaign. For me, it is a big honour because you can never get used to going to the different parts of the world and seeing your face."