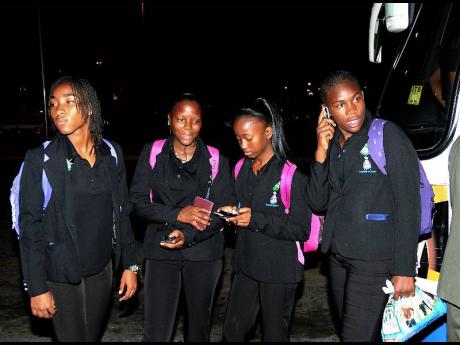 Members of Jamaica's Under-17 women's national team as they stand outside the team bus at the Norman Manley International Airport, when they returned to the island on Monday night. - Winston Sill/Freelance Photographer

Jamaica's Under-17 head coach, Vin Blaine, expressed disappointment about their failure to progress to the final- round CONCACAF qualifiers in Guatemala City.

The junior Reggae Girlz failed to progress to the final of the qualifiers after a shocking penalty decision by the referee handed Panama a 1-1 draw.

The Jamaicans, who defeated Guatemala 3-0 in the opening game, but lost 4-0 to Canada in their second match, needed a victory in the final game to advance ahead of Panama in the final game.

They were well on their way when Shantel Bailey gave them the lead in the 33rd minute.

However, the Mexican referee gave them a questionable penalty in the 72nd minute, much to the surprise of the Jamaican delegation. Panama and Jamaica ended on four points each, but Panama went through with a plus-one goal difference ahead of the Jamaicans. Canada topped the group with maximum nine points from three matches, while Guatemala ended without a point.

Asked how he felt about the manner of their elimination shortly after the Jamaica team returned home at the Norman Manley International Airport on Monday night, Blaine said: "I am very disappointed ... this is the worst disappointment that I have ever had in my entire footballing career.

"In the game against Panama, we did what we wanted to because we went ahead 1-0 and we took that up to the 72nd minute of the game," he said. "We missed two good chances before that decision was made, which was definitely not a penalty, and yet they gave a penalty," Blaine remarked.

"I make no reservation in saying that it was definitely not a penalty, but somehow they gave a penalty against us and that cost us and prevented us from moving on to the next round," the head coach said.

He added: "It was not even close to a foul; if anything it was a foul against our player. This makes me wonder, because you knock out a nation with just one call, and once again we went out by the hands of another poor referee call."

Just short of the target

Blaine said they were looking forward to playing in the semi-final round, but admits they should have scored a lot more goals against the Guatemalans.

"We wanted to make it to the semi-final round, but we did not score as many goals in the first game as we should have, and with Guatemala capitulating to Panama 7-1 it never helped us at all," he said. "These girls are extremely disappointed because they have worked really hard to reach this stage, and for them to lost out like that, it is really tough for us."

Kayla Gray netted a brace for the Jamaicans in their 3-0 win over Guatemala in the opening game, while Khadija Shaw scored the third goal for junior Reggae Girlz.