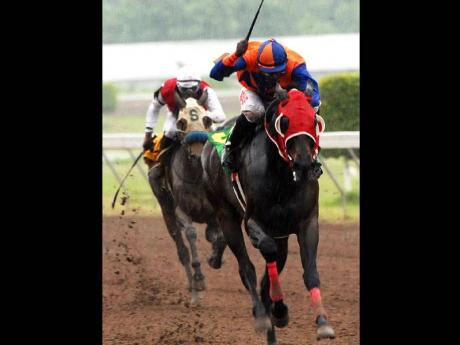 FOREVER MINE (right), with Omar Walker aboard, canters to the finish line to outlast fast-finishing REGGAE ROCK (out of photo) and win the $250,000 claiming event for 3-y-o & Up horses over the straight course (1000m) at Caymanas Park on Saturday. In the background is FREE FALL (R Halladeen), who finished sixth. - Colin Hamilton/Freelance Photographer

ANNTRACK, who has settled down nicely to his racing since fitted with the figure eight in March, should resume winning ways in today's restricted allowance feature (non-winners of two) for the Henry George Harrison Sr Memorial Cup over 1300 metres at Caymanas Park.

Trained by Wayne Parchment for his mom, Margaret (also a trainer), the four-year-old colt has shown significant improvement in three races in the figure eight this season. Despite having to carry topweight of 57.0kg, he should prove equal to the task with four-time champion jockey Omar Walker replacing the 3.0kg claiming apprentice Richard Cole.

ANNTRACK ran on strongly for an easy victory over 1200 metres in maiden company on March 17 and has followed up with two good efforts in defeat, all with young Cole aboard.

He then finished third to out-of-class SHYANA in the fast-run Jockeys' Guild of Jamaica Trophy over 1400 metres on March 31 and followed up with a good second to PRINCECHAD in the Joshua Morrison Memorial Trophy over 1500 metres on April 25, a race in which he had several of today's opponents (including SERIOUS BUSINESS) behind.

SERIOUS BUSINESS, who finished fifth after disputing the lead into the straight, should give a good account of himself over today's shorter distance. The same is true of ACTUS REUS, FIRST 'K' BOY and the perennial bridesmaid MAYBE I SAY SO under champion jockey Dick Cardenas.

But the biggest danger to ANNTRACK must surely be FIRST 'K' BOY, who was a disqualified winner over the distance on March 10. The 4-y-o gelding from the stables of Gresford Smith is down to carry 56.0kg under leading jockey Dane Nelson, and having worked well should ensure that ANNTRACK is extended.

Other firm fancies on the card are FULL JOY to stave off FREEDOM PRINCE in the third race ($180,000 claiming) over 1200 metres; SAINT THERESA (working well) to romp the seventh; ETHOS in the eighth; the unbeaten TYPEWRITER to repeat in the ninth; and the winningest horse in the history of local racing, NASATOL (now dropped in class), to lead home MISS CRYSTAL in the closing race for $180,000 claimers over the straight. NASATOL, now 11 years old, has won a record 36 races.