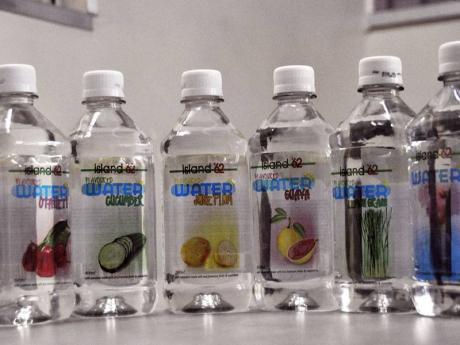 All six flavours of Jamaica's newest water on the market, Island '62. - Photo by Chadwyck Vassell

You may be familiar with the great-tasting flavoured water, Island '62. It sets itself apart from other flavoured water brands by offering unique Jamaican flavours like cucumber, June plum, and otaheite.

The name Island '62 is an ode to the island which received its Independence in 1962 .

The company was formed with the idea of bringing world-class marketing to an already great Jamaican product.

Marketing Manager Darrell Burgess explained that the idea of the flavoured water came about in 2009, when a friend lamented that he could not find a truly unique Jamaican product that would 'wow' the United Kingdom (UK) market. The idea grew from there and Island '62 ended up in a partnership with Jefe.

"Jefe already had the product, and we had the marketing and expertise needed to make Island '62 Water the rapidly growing brand that it is today," Burgess said.

Breaking in to Uk market

Although Island '62 has yet to break into the the UK market, it is rapidly rising to the top in Jamaica and is currently being exported to the United States and Trinidad and Tobago, which are tough markets to get into, Burgess confessed. He believes the product might not make it to the UK until after the Olympics.

Meanwhile, Island '62 has been receiving overwhelmingly positive reviews from consumers. Burgess explained that the main challenges are distribution and overcoming the reservation that some may have towards a new product. He told Food that he would like more support from the larger commercial buyers, especially within the tourism sector. According to Burgess, this sector has been very slow to respond and have opted to stock and serve imported brands to their clientele.

Supporting the Island '62 brand means supporting the local farmers and communities which supply the ingredients for this product, he said.

It is hard to tell how this authentic Jamaican product will be affected by the Jamaica 50 celebrations, but Burgess hopes that all Jamaicans, both home and abroad, will embrace Island '62 Water as their own.

It is clear that a lot of effort has been put into the design. Burgess explains that the sleek, unique-yet-simple design of the bottle and label is to reflect the crisp, one-of-a-kind flavour of the water. The rectangular design of the bottle stands out among its cylindrical counterparts.

Island '62 can be found in the following supermarkets: Progressive Stores led by the Shoppers Fair chain, Loshusan, Hi-Lo and MegaMart, as well as other smaller chains such as General Foods, Lee's, Joong, and Carihome, among others.