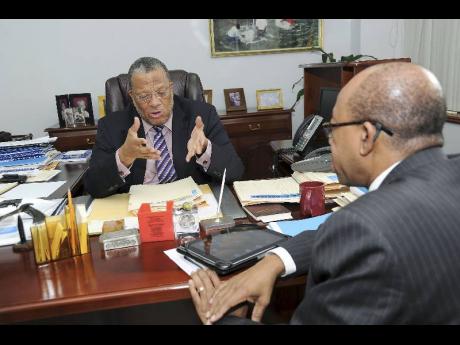 FINANCE MINISTER Dr Peter Phillips has signalled that the Estimates of Expenditure to be tabled in the House of Representatives today would "require important sacrifices" from Jamaicans.

Yesterday, Phillips also told The Gleaner that the estimates would focus heavily on debt payment.

"We will see an Estimates of Expenditure which I have tried very hard to allow us to pay down the debt, to keep development programmes going, but is going to require important sacrifices because, in real terms, the amount available is very, very tight," the minister told The Gleaner.

The Budget is scheduled to be tabled at 2 p.m., hours after Governor General Sir Patrick Allen deliver the Throne Speech to mark the official opening of Parliament for the 2012-2013 legislative year.

Leader of Government Business Phillip Paulwell has said this is the last year that the speech, which will indicate the Government's programmes for the year, will be called the Throne Speech.

North East St Elizabeth Member of Parliament Raymond Pryce had moved a motion in the House calling for the Throne Speech to be renamed the People's Speech.

Two weeks ago, Pryce said that as a "tangible development" in the 50th year of Jamaica's political independence, the resolution should be immediately considered so that this amendment may be approved in time for the opening of the 2012-2013 legislative year.

"We are agreed that we should change it from the Throne Speech, but the issue now is finding an appropriate name," Paulwell told The Gleaner earlier this week.

In the meantime, this is the first Budget that Phillips will table in the House of the Representatives, having taken up the job as finance minister in January, following a general election victory by the Portia Simpson Miller-led People's National Party.

Phillips, who on the campaign trail heading into the December 29, 2011 general election, had promised a brighter day for Jamaicans under the PNP, said preparing the Budget has not been easy.

Nonetheless, the minister said he expects that "the Budget and the whole process will be successfully implemented and that the country will benefit a lot from developmental activities within the private and public sectors in the course of the next year".

In the meantime, Phillips said it is essential that the country achieve a high primary surplus this year, as it is critical to laying the platform for economic growth.

"The essential point of the estimates and the programme must be to get the country out of the debt problem, and so what you will see with those estimates is that the debt service numbers are higher," the finance minister said.

Phillips said the country, this year, will have to achieve a higher primary surplus "so we can pay down this debt and release future generations from the burden of debt and allow the country to resume a path a growth, which it will not be able to sustain if we are carrying this big millstone of debt around our necks".

Jamaica last year spent nearly 62 cents out of every dollar in the Budget to service debt.