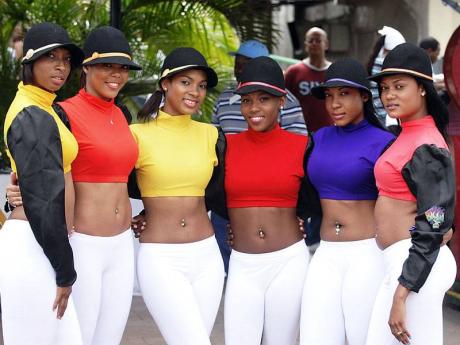 Part of the festivities for the day included this bevy of beauties being given the ride of their lives on the backs of some very strong 'human horses'! - photo by Colin Hamilton 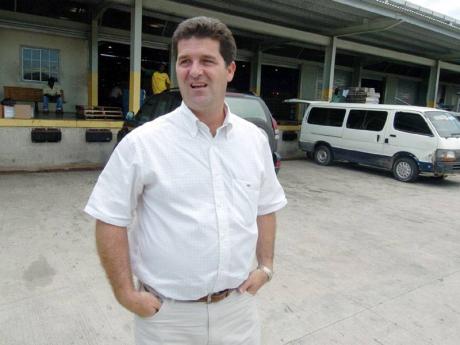 Ever since the first corporate raceday achieved phenomenal success several years ago, many of Jamaica's leading companies have hosted their clients, families, customers, and even the media at the lavish affairs, usually staged on the infield of the historic Caymanas Park racetrack located on the St Catherine plains. Some of the companies are: Supreme Ventures, Red Stripe, Digicel, LIME and, most recently, Wisynco.

But just how does it profit a company to host hundreds of people for an entire day? After all, they have to be fed, watered, entertained and showered with gifts. Apparently, there's plenty to gain. The recent Bigga Jamaica Oaks raceday was the fourth time that Wisynco had been toasting outstanding women and sponsoring the entire day's events at the track. William Mahfood, head of the company, remains happy with the decision to sponsor.

"We enjoy the benefits of exclusivity at the track, the ability to brand the park, and the level of branding and exposure is excellent," Mahfood said. As for the reason for choosing to honour women for their contribution to the growth and development of Jamaica on that day, Mahfood said the rationale was simply because the Oaks was about the best fillies racing on the day, so he thought it a great opportunity to honour some of the women who were best in their areas in the society. This year, women from sports, the media, the theatre and entertainment were honoured.

The company also sponsors the Boom St Leger, which is set for later this year.

Wisynco also takes its corporate social responsibility seriously and contributes generously to a several schools, Food For The Poor, the Bustamante Hospital for Children, and schoolboy football.

On the business side, the company is now undergoing factory expansion by upgrading existing machinery and equipment, putting in new ones to improve efficiency, create new opportunities for production, and modernise technology. The expansion, set for completion next month, Mahfood said, would increase the company's production capacity by some 10-15 per cent.