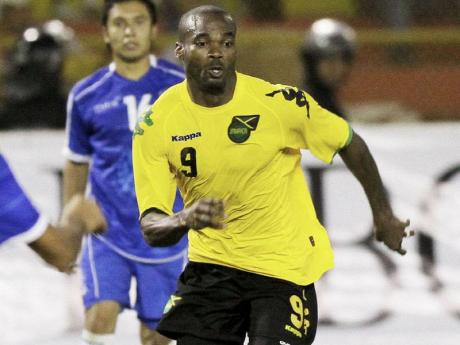 National striker Omar Cummings has suffered another injury setback, raising doubts about his participation in upcoming football internationals for Jamaica, including World Cup qualifiers next month.

Cummings damaged his left ankle while playing for Colorado Rapids in Major League Soccer (MLS) on Sunday in the United States.

Further tests are expected to determine the full extent of the damage, but he described the injury as a "sprained ankle with probably some ligament damage".

The club's website reported an MRI showed Cummings had suffered "a grade-II sprain" and "is expected to be out approximately four weeks".

The injury forced him to leave Sunday's game against FC Dallas around the 14th minute.

"I knew instantly I had to come off the field," Cummings explained Tuesday while recuperating in Colorado.

In early May last year, Cummings, a speedy, skilful forward with a lethal shot in both feet, missed seven games for Colorado with what the club described then as a "grade-II sprain" to his right ankle. That ruled him out of the CONCACAF Gold Cup for Jamaica. Now the injury is on the other foot.

"This is a new-brand thing," he said of Sunday's mishap. "It was my other ankle last year."

Cummings did not blame anyone for the injury, insisting it was just an unfortunate occurrence.

"The ball was played into the box," he said. "The defender tackled. With his body pressure, my ankle rolled."

Cummings was not among the 14 overseas-based players invited for Jamaica's friendly international against Guyana on May 18. However, if fit, he is expected to play a key role in other upcoming games, including CONCACAF World Cup Qualifiers, which begin on June 8 against Guatemala in Kingston and Antigua and Barbuda on June 12.

Cummings has almost ruled out May 16, the date of Colorado's next match against DC United in MLS, the top professional league in North America.

Subsequent fixtures, including May 19 versus Sporting Kansas City and May 26 against Montreal Impact, are also in limbo.

Recovery from last year's ankle injury, which he described as more serious than the one suffered on Sunday, has convinced Cummings he will be ready for Guatemala.

"I should be," he said. "Based on the last injury, I missed five weeks. This one is no where as bad."

Cummings has formulated a different approach to this injury as well. Last year, he hurt his cause trying to come back too soon.

"I thought I rushed it and maybe I did more damage," Cummings said. "This time I'll go as I feel. No need to rush."

He had a disappointing MLS 2011, scoring three goals and adding six assists, after finding the net 14 times with three assists in 2010. This season, his sixth with Colorado, Cummings started all 10 MLS games. He has three goals and an assist so far.

Cummings, who played for Rivoli United and attended the University of Cincinnati in the United States, has represented Jamaica's senior Reggae Boyz 27 times, according to Wikipedia, scoring seven goals.