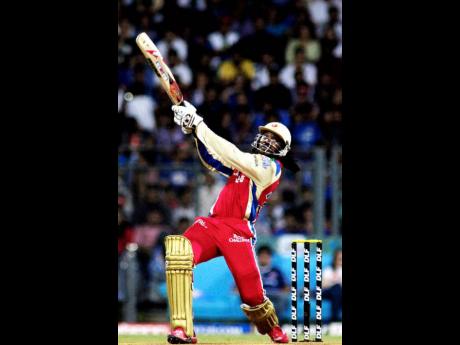 The left-handed Gayle, recently at the centre of a dispute with the West Indies Cricket Board, carved out a sublime, unbeaten 82 off just 59 balls as Royal Challengers chased down Mumbai's disappointing 141 for six, with two full overs to spare at the Wankhede Stadium.

Earlier, Mumbai struggled after being sent in to bat, with Dinesh Karthik top-scoring with 44 from 39 balls.

Gayle then took centre stage in Royal Challengers' run chase, anchoring two partnerships to lift his side over the top.

The Jamaican put on a measured 48 from 51 balls with Sri Lankan Tillakaratne Dilshan who got 19, before dominating an unbroken stand of 94 for the second wicket with Virat Kohli (36 not out).

Gayle stroked five fours and six sixes in another highly entertaining innings, as he moved to 515 runs for the tournament.

Dropped by Smith in the deep on 21 with Royal Challengers on 34 without loss in the sixth over, Gayle motored on unperturbed.

He smashed the last three balls of left-arm spinner Pragyan Ojha's second over for sixes as the 11th over of the innings cost 22 runs.

Kohli, meanwhile, hit one four and two sixes off 25 balls, to give support.

The win was the second straight for Royal Challengers and it carried them into fourth place in the standings on 13 points.