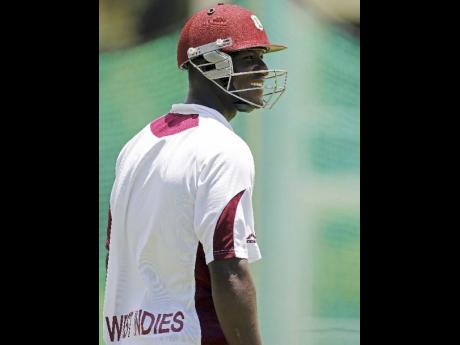 West Indies will be hoping the rain stays away when they face England Lions in a four-day match starting here today, a fixture that will be their final warm-up before the Lord's Test next week.

The opening three-day tour match was ravaged by rain in Hove last weekend with only 34 overs possible, leaving the Windies short of match practice since arriving in England last week Wednesday.

For the United Kingdom, it has been the wettest April on record since 1910, and the adverse weather has carried into May with several County matches already disrupted.

West Indies captain Darren Sammy told reporters here yesterday his side had managed to look past the disappointment of the inclement weather.

"It (rain) could be frustrating, but over the past three seasons we've handled our distractions quite well," Sammy pointed out.

"I remember in Sri Lanka when it rained a lot we had a lot of use of the indoor facilities. Guys got into the habit of hitting a lot of balls, we played some dominoes, we had more meetings, we looked at more footage.

"Coach Gibson is quite handy, he always finds something for us to do. We get more time to bond as a team."

He added: "It's disappointing because our main goal here is to play cricket and get out in the middle but we have no control over the weather."

Light rain and slightly chilly temperatures have been forecast for the next two days here in the East Midlands, but with the weather improving heading into the weekend. And with the first Test bowling off May 17, West Indies will be anxious to get time in the middle in order to get acclimatised to the conditions.

West Indies have been boosted by the arrival of Jamaican all-rounder Marlon Samuels and Guyanese left-hander Assad Fudadin, both of whom missed last weekend's three-day game for varying reasons.

Samuels arrived Tuesday after campaigning in the Indian Premier League, while Fudadin was stuck in Jamaica securing a United Kingdom visa.

They are, however, still without the other Guyanese left-hander Narsingh Deonarine, who was also held up in Jamaica with visa problems, but is now expected to join the squad here today.

With all three players missing and fast bowler Fidel Edwards injured, West Indies were forced to face Sussex with the 11 available players and no reserves.

Sammy said he was pleased to now have the full squad available.

"Seeing Marlon and Fudadin this morning was very good for us and we welcome both of them. That felt good, the whole family uniting and we're preparing ourselves for the first Test match," Sammy said.

"Everyone is available for selection. We'll select the team tonight and hopefully come up with the best XI in these conditions to prepare ourselves for the Test match."

West Indies face a strong Lions squad - the country's A side - that includes prolific Test batsman Ian Bell and Michael Carberry, who played a single Test two years ago.