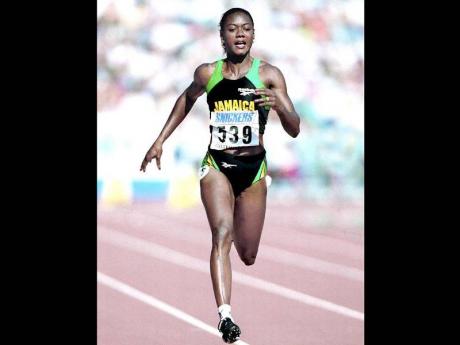 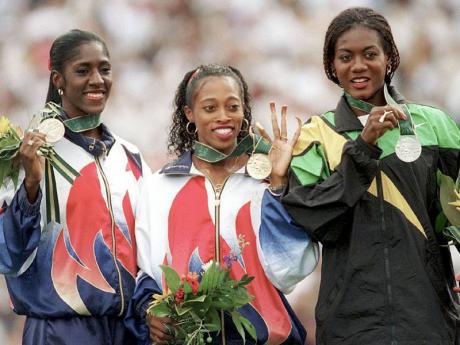 Women's 100 metres gold medallist Gail Devers of the United States is flanked by her compatriot Gwen Torrence (left), bronze, and Merlene Ottey of Jamaica, silver, during the medal presentation ceremony at the 1996 Summer Olympic Games in Atlanta, on Sunday, July 28, 1996. File 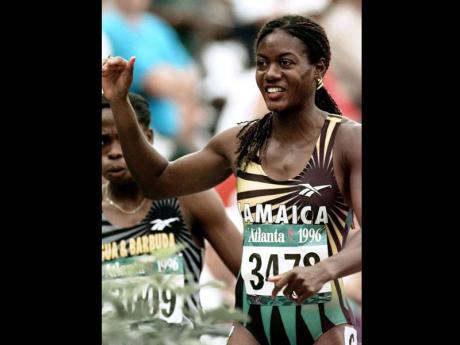 Merlene Ottey turns 52 today, and even though she last ran for Jamaica 12 years ago, she is still an icon. Wonderfully consistent, she plugged away against the odds and achieved great results.

At the World Championships, in addition to her two individual gold medals, she anchored Jamaica to victory in 1991. She also won four individual silver medals. The 'best' of them came in the 1993 100- metre final where she was adjudged to be second in a race that was closer than close.

The gold went to Olympic champion Gail Devers, but when Ottey rose to accept the silver, the Stuttgart fans acclaimed her with almost unending applause.

A whiz on the clock, she broke 11 seconds for 100 metres in 67 races. Ottey only surrendered the national record when Shelly-Ann Fraser-Pryce ran 10.73 seconds to win the 2009 World Championships gold medal.

Almost single-handedly, she dragged Jamaican sprinting into the modern era.

Cynthia Thompson, Una Morris and Rosie Allwood, all Olympic finalists, had opened the door, but Ottey swung it wide open. Understandably, she was the first Jamaican to break 11 seconds for the 100m and 22 seconds for the 200 metres, an event in which she holds the national record at 21.64.

Indoors, she was the first woman to break seven seconds for 60 metres. She still holds the world record for the indoor 200 metres at 21.87 seconds. No one else has broken 22 and only the USA, Jamaica and East Germany have faster outdoor national records.

If not for the East Germans, she would have more to show for her efforts. Previously secret government documents have confirmed that East German athletes of the 1980s were boosted by a state-organised steroid use programme.

Perhaps, those robberies will one day be wiped from the record books.

In 1999, when she ran into trouble with a positive test for a banned steroid, she fought to restore her good name. She was exonerated and she came back early and in time for the 2000 Olympics.

For years, she was the one we depended on to keep us on the medal table at major internationals. Only once, in 1988, did she ever leave Olympic or World Championships competition empty-handed.

Illness forced her out of the 100 semi-final in Seoul, South Korea, and she fought her way to fourth, from lane one, in the 200 final. Her time - 21.99 seconds - missed the bronze won by East German Heike Dreschler by just 0.02.

She has done more than just run fast. She has inspired a whole generation of world beaters. Veronica Campbell-Brown speaks of her with respect and reverence.

Recently, she said: "she always sets the standard to follow. We have all tried to emulate her."

Speaking on TV this year, Sherone Simpson recalled being star-struck when, as a schoolgirl, she met the icon. Hurdling ace Delloreen Ennis-London also caught the Ottey bug early. In 2008, she told interviewers that when she was little she wanted to be like Ottey when she grew up.

Now, VCB, Simpson and Ennis-London are role models for the next generation. They learnt from the best. Ottey, Grace Jackson and Juliet Cuthbert and - still 1-2-4 on the Jamaican all-time 200-metre performance list - set the pace for the VCB generation.

Veronica, who turns 30 on May 15, has played her part in a golden era where Jamaica has enjoyed stunning success. It's an era sprinkled liberally with big championship titles and world records. In a time like this, it's easy to forget the past. That is something we avoid, especially today on the great lady's birthday.