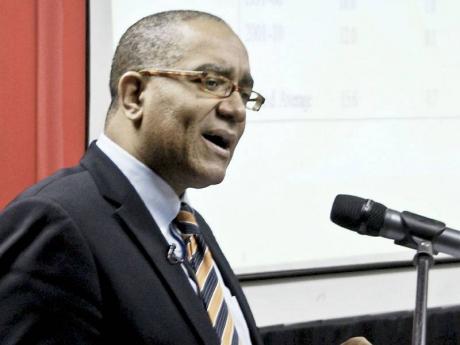 Governor of the Bank of Jamaica, Brian Wynter. - file

Central bank governor Brian Wynter warned Wednesday that economic activity would slow this year due primarily to the country's precarious fiscal position as well as uncertain world events, a day ahead of the release of the budget document.

Wynter said there are downside risks associated with a fiscal consolidation package aimed at reducing government deficit and debt accumulation, which is expected to be presented by Finance Minister Dr Peter Phillips when he reveals his budget plan on May 24.

The Estimates of Expenditure were tabled in Parliament on Thursday.

The Bank of Jamaica's forecast for economic growth for fiscal 2012-13 is zero to one per cent, compared to the estimated 1-2 per cent growth for the period ending March 2012.

Economic output in the March 2012 quarter is also projected to have grown zero to one per cent, and the June quarter is forecast to expand at the same pace.

Wynter said at his quarterly briefing on monetary policy Wednesday that the outlook reflects the expectation of continued weak domestic demand — although still an improvement relative to the crisis period — and a slower pace of expansion in world growth in calendar year 2012 relative to 2011.

Despite the forecast, the governor said it is anticipated that with the steady recovery in the US economy there will be an increase in external demand for Jamaica's goods and services, as well as acceleration in remittance flows to Jamaica.

Upside risks to the forecast include the impact on growth and employment of major investment projects later in the fiscal year, he said.

However, Wynter said the risks to the growth forecast are largely to the downside.

"Primary among these is the uncertainty regarding the extent of the fiscal consolidation to be announced," he said. "Fiscal consolidation would result in reduced domestic demand in the near term, which could be exacerbated by weaker global growth and the impact of adverse weather."

But the central bank is also forecasting that, should the fiscal measures materialise, the adverse impact on growth will be temporary.

He said economic growth should pick up in the 2013-14 fiscal year and strengthen in subsequent years, consistent with the forecast for expansion in the world economy, the successful implementation of a number of foreign direct investment projects and the reopening of two Jamaica's alumina plants.

The assumptions underpinning this year's forecast, Wynter said, include generally favourable weather patterns both in Jamaica and major grain-producing countries, as well as a moderate increase in the price of crude oil.

But there are also significant upside risks to the forecast for inflation for the current quarter and the fiscal year. Like economic growth, "the main risk relates to the measures that may be announced in the imminent budget presentation to set the fiscal accounts and debt dynamics on a sustainable path for the medium term", said the BOJ governor.

He said the measures could result in inflation exceeding the upper bound of the forecast range for both the June quarter and the fiscal year. It could also be worsened by higher-than-anticipated oil prices if there is resurgence in geopolitical tensions.

However, Wynter said inflation, after the initial impact of potential fiscal measures, is expected to decelerate over the medium-term towards the rate of inflation of Jamaica's major trading partners.

"Successful fiscal consolidation efforts, notwithstanding the near-term effects … will establish a downward trajectory to the Government's debt burden and secure the macroeconomic stability that is the cornerstone of sustained long-term investment in the productive and social sectors alike," the BOJ governor said.

Fiscal and debt sustainability are also critical prerequisites for Jamaica to emerge from the extended cycle of low growth and high inflation, but there must also be significant improvements in the country's external competitiveness, he added.

The governor also announced that the uptick in credit to the private sector observed in the December 2011 quarter continued in the March 2012 quarter.

He surmised that the increased demand for private-sector loans could be reflective of the continued decline in commercial bank loan rates as depicted in the fall of 35 basis points in the weighted average rate of interest on private-sector credit.

Also encouraging was a marginal improvement in the quality of private-sector credit, with the ratio of non-performing loans three months and over declining to 8.4 per cent at the end of March from 8.8 per cent last December.

Wynter also said that during the quarter there were intermittent periods of excess demand for foreign currency, and that to augment supplies in the market the Bank sold a net US$102.1 million, which contributed to a decline in the net international reserves to US$1.77 billion.

The gross reserves at the end of the quarter totalled US$2.63 billion.