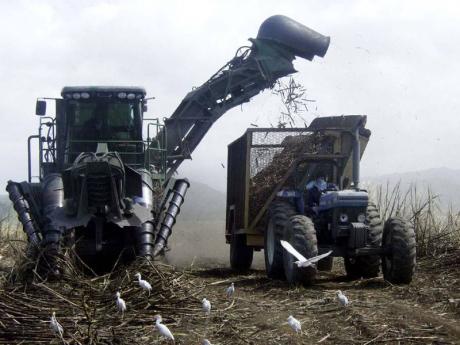 A haze of smoke hangs over a cane field in Hampden, Trelawny, during reaping season in 2006. - File

The National Environment and Planning Agency has issued an ultimatum to the sugar industry to stop burning sugar cane by 2014, but sugar interests say if they accede it will wind up costing them more to farm cane.

In a letter dated March 14, 2012 to the Sugar Industry Authority, head of NEPA, Peter Knight told the sector it had two years to end the traditional practice of burning cane during reaping.

Knight emphasised that the directive was part of a broader campaign against open burning and that similar correspondence was sent to stakeholders in other industries.

"NEPA is willing to allow the practice of open burning of sugar cane for a period no longer than two years from the date of this letter to allow the industry time in which to explore and adopt a more environmentally friendly practice in the harvesting of the crop," the letter reads in part.

Knight declined to comment on whether his timeline was reasonable, but said he was open to discussions on the issue.

He will likely face a rebellious sector if its players take him up on the offer to talk.

"That is out of the question. That can't work," Rickards said.

Rickards said it suits farmers to burn cane in some areas as reaping "green" canes will leave a trash cover which requires machines to mulch into the soil. He said the equipment is expensive to procure and that "worse" the industry is required to pay GCT on them.

Also, if the mulch is not turned over properly when fertiliser is applied it will attach to the trash, rather than mixing with the soil, he said.

Both Rickards and Keith Scott, the planning and information manager at the Sugar Industry Authority, said that the availability of cane cutters, the terrain and the cost of mechanical reapers are major problems to consider before the industry can move in the direction of reaping "green" canes.

"The breed of people called cane farmers are dying out, ageing and nobody wants to go into the cane cutting business, so we have to consider mechanical harvesters," Scott said.

"People need work but they are not willing to do cane cutting work. Right now, we have a core of people that we sometimes have to move from one parish to the other."

NEPA has tried before to end cane burning, citing its nuisance to residents in communities near sugar estates and cane fields.

In 2009, when the agency last tried to make progress on the issue, the alternative of 'green' cane harvesting was proposed and discussed, Knight told the Financial Gleaner.

He said since then the industry was placed on notice and his agency was not prepared to allow indefinite use of the burning option.

"This is a challenge and we have to address it. We have not seen any rush to see them stop burning the sugar cane, even though they have said that they are going to stop. So since the initial discussion nothing has really happened, so we are writing to them to make it formal. We have to put some rush in the situation. We have to give them the ultimatum," Knight said.

Scott acknowledges that the burning can be a nuisance to the residents but rationalised that cane is not burned every day. At most, it is done once per month in some areas during the reaping season, he said.

Cane reaping season usually lasts from late December to June. This year, farmers and estates are trying to finalise reaping in May to stay ahead of the rains.

Scott said some of complaints about smoke nuisance are beneficiaries of land grant from the SIA in areas such as Bernard Lodge and Innswood.

He said the stakeholders in the industry are to meet to discuss the letter and then forward individual reports to the SIA, which the regulator will collate into an industry position to respond to NEPA.

The SIA official said he would not comment on the two-year ultimatum.

"It may be that going green is inevitable, but it is going to take some time," Scott said.

He estimates that mechanical harvesters can reap only two-thirds the amount of green cane than if it were burnt and that cane cutters would cut far less than that amount "even on a good day".

"We will be working towards maximising the amount of cane we can cut green by 2018-2020 thereabouts. By then, we should know exactly where we are," Rickards said.

Knight acknowledges that transitioning to green cane harvesting will change the industry dramatically but said it would force the players to modernise their operations.

Notably, one of the most efficient sugar producers, Brazil, has started to transition into harvesting green cane only, according to wire reports, which the South American country plans to totally ban burning by 2017.

To the north, Louisiana and Florida in the United States have not been able to settle on a timeline to end burning.