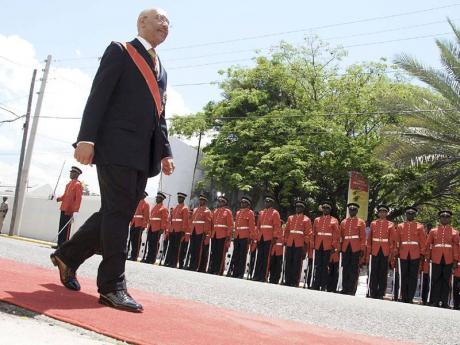 Governor General Sir Patrick Allen begins the inspection of the Guard of Honour of the First Battalion of the Jamaica Regiment of the Jamaica Defence Force. - Ricardo Makyn/Staff Photographer 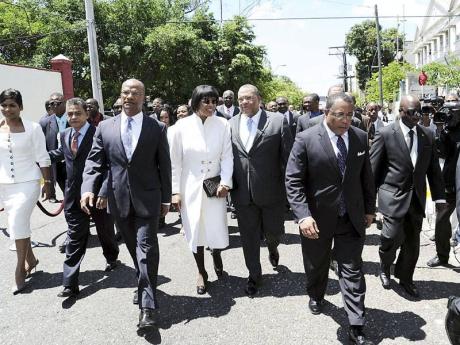 Prime Minister Portia Simpson Miller arrives with members of her Cabinet for the ceremonial opening of the 2012-2013 session of Parliament at Gordon House in Kingston yesterday. - Norman Grindley/Chief Photographer 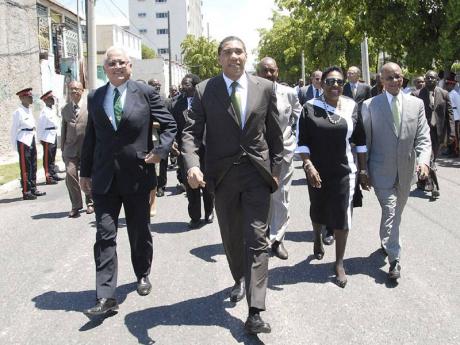 Several ministries and government departments will have to work with less money this fiscal year, despite an approximately 14 per cent increase in the finance ministry's spending plans.

Key ministries like health, education, national security and tourism will have less to spend on their day-to-day expenses and there is no provision for a sizeable salary increase for public-sector workers.

But the Ministry of Local Government will have much more to spend on the ailing fire service and there is $1 billion allocated to fuel the Jamaica Emergency Employment Programme (JEEP), the Government's flagship work project.

Details of the Government's spending plans for the 2012-2013 fiscal year were revealed yesterday when Finance Minister Dr Peter Phillips tabled the Estimates of Expenditure in Parliament.

The estimates show Phillips plans to spend $612 billion for the fiscal year. This is $76 billion more than the $536 billion which was allocated for expenditure last year.

With inflation for the 2011-2012 fiscal year finishing at just above seven per cent, the first Budget to be presented by Phillips since he was given charge of the country's purse strings reflects a slight increase in spending in real terms.

The estimates show projected spending of $375 billion on recurrent, or housekeeping, expenses which include items such as salaries, utilities and interest payments on government loans.

This is $23 billion or just over six per cent more than the $352 billion spent last year. That is slightly below the rate of inflation for the last fiscal year and underscores the warning by Phillips that ministries and state departments will have to survive with less.

Among those ministries getting less money is the Dr Fenton Ferguson-led Ministry of Health which sees its housekeeping budget cut from $34 billion last year to $32 billion this year.

The biggest reduction Ferguson will face is for health-service delivery which has moved down from $30.6 billion last year to $28.7 billion this year.

All four regional health authorities have been given less money while the Government's grant to the University Hospital of the West Indies has also been reduced.

Despite the budget cut, there is no indication from the Government that it will be reintroducing user fees in the public-health sector, but a note in the estimates suggests that some of the functions now being performed at the regional level are to be returned to the health ministry's head office.

There is no indication of what those functions are, however that question should be answered when Ferguson speaks in the Sectoral Debate.

Ronald Thwaites, at the Ministry of Education, will also find himself with less money for housekeeping expenses.

His budget has been cut by $2 billion with less money available for primary education, library service and general executive direction and administration of the education ministry.

The Peter Bunting-led Ministry of National Security sees a slight reduction in its allocation for recurrent expenses but that should not affect the police who will get a bit more to spend.

Where Bunting will have less to spend is for the Jamaica Defence Force and the purchase of goods and equipment.

The big addition on the recurrent side of the Budget is $16 billion for interest payments on debt, which is up to $136 billion, or 36 per cent of what the Government plans to spend.

The Ministry of Local Government and Community Development also sees its recurrent budget doubled to $7.5 billion with the bulk of that going to the Jamaica Fire Brigade for the administration of fire stations.

On the capital side of the Budget, the Government plans to spend $237 billion this year, a $53 billion increase (29 per cent) over last year.

The lion's share, approximately $200 billion (84 per cent), goes to the Ministry of Finance for loan repayment.

That is $54 billion more than what was allocated to the finance ministry on the capital side last year.

Of the $37 billion that is left on the capital side after the debt repayment is taken out, the Dr Omar Davies-led Ministry of Transport, Works and Housing gets the bulk - $15 billion, while the other $22 billion is shared among all other agencies and government departments.

In addition to the $1 billion of JEEP fuel that he has been allocated, Davies also has $1.3 billion to spend from the Road Maintenance Fund and just over $2 billion for the Jamaica Development Infrastructure Programme.

After the Standing Finance Committee of Parliament sifts through the provisions next week, the finance minister will tell the country how he will fund the expenditure plan when he opens the Budget Debate on May 24.