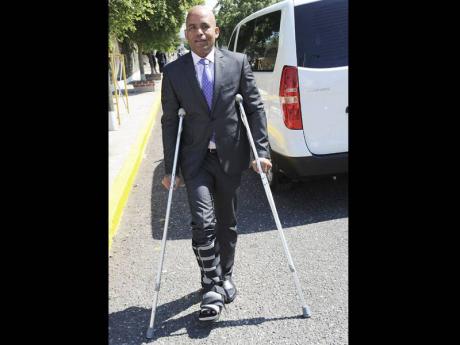 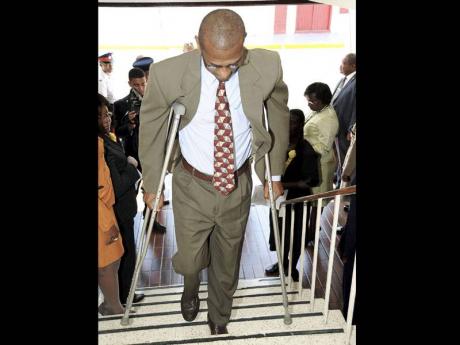 Dr Lynvale Bloomfield, member of parliament for East Portland, makes his way up the stairs of Gordon House yesterday.
1
2

SWINGING ON crutches into Gordon House, two rural members of parliament (MPs) yesterday declared they were not going to allow their broken bones to be an obstacle between them and the people's business.

James Robertson, the representative from West St Thomas, said his constituents were anxiously awaiting word about prospects for their development.

"We have issues such as water and roads that need to be addressed and I must be in a position to report to my constituents," Robertson told The Gleaner.

Robertson said, as an elected representative, he had a duty to be in Parliament for the tabling of the Budget.

"I wanted to see what is in store for the constituency. Just a plate and eight screws in my foot cannot stop me from going there," Robertson said.

Dr Lynvale Bloomfield, MP for East Portland, suffered a more severe injury than Robertson's late in March when he broke his hip.

Unlike Robertson, who can still bend his knee and move about with some ease, Bloomfield hobbles at a snail's pace.

"Patience is a virtue," Bloomfield said after making his way up a flight of stairs on his way into the chamber of the House.

Bloomfield has promised that his injury would not keep him away from the opening of Parliament.

The East Portland MP said while his decision to attend Parliament, despite a broken hip appears to be symbolic, it goes far beyond that.

"It is an experiential thing, once you feel it you know it. Having gone through the situation, I now understand what it is to struggle and to make attempts to overcome," Bloomfield said.

On the side of symbolism, Bloomfield said his action demonstrates that Jamaicans have an indomitable spirit.

"It says that we aim to continue to fight not only for the betterment of our constituency, but also for our country."