Little support for opening of Parliament 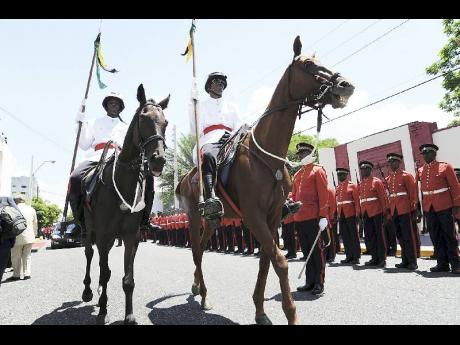 Members of the First Battalion in the Jamaica Regiment of the Jamaica Defence Force take part in the opening of Parliament. - Norman Grindley/Chief Photographer

Unlike in previous years, only a handful of supporters came out to witness the pomp and circumstance and cheer on their respective political parties, during yesterday's ceremonial opening of Parliament.

Following Governor General Sir Patrick Allen's inspection of the guard of honour and the flourish of trumpets by the First Battalion The Jamaica Regiment of the Jamaica Defence Force, the proceedings moved inside Gordon House, while the few supporters outside sought shade from the heat of the sun.

Sitting under a tree a few yards away from the Parliament building, a few People's National Party (PNP) supporters were engaged in lively discussion.

"Me feel good, me really feel good. No more hungry, me party in power now," one woman said.

"No more chicken back," another added.

A woman walked over to the group and asked: "Wha happen to Bruce (Golding)? Him disappear inna thin air?"

The ladies shrugged their shoulders and laughed, returning to their celebratory discussion.

At the northern end of Duke Street, the handful of Jamaica Labour Party (JLP) supporters were more boisterous, using colourful language to describe members of the PNP Cabinet.

"We good, man, we good," one woman answered in response to queries about how they felt about yesterday's opening session.

"We little, but we tallawah," another stated.

"We party may not be in power but we a hold wi head high," one said.