Estimates at a glance 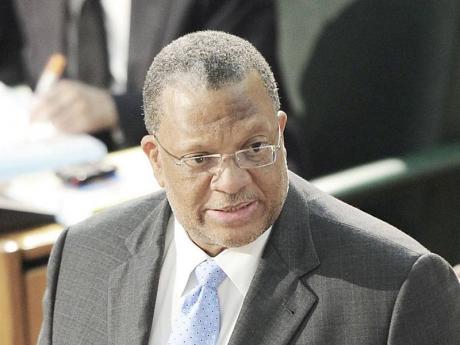 The Government of Jamaica tabled an expenditure budget of $612.4 billion in the House of Representatives yesterday. This Budget reflects above-the-line expenditure of $277.72 billion and amortisation payments of $198.17 billion.

As in previous years, debt servicing accounts for the largest portion of the Budget. In the upcoming Budget, debt servicing accounts for 54.65 per cent as compared with 46.38 in 2011-12 - an increase of approximately 8.3 per cent. And it is obvious that the current International Monetary Fund negotiations could be drawn out and are requiring a significant increase in debt repayment during this fiscal year, including outstanding debt obligations from the sugar divestment that have been assumed by the Government.

Perhaps the most significant change in the 2012-13 Estimates of Expenditure is the overall budgeted increase of $70.11 billion in the provisions for the repayment of loans as compared with 2011-12. The Government has earmarked $198.17 billion for amortisation as compared with $128.06 billion repaid in the previous year. The majority of this increase ($57.43 billion) is slated for the repayment of internal loans.

a) Repayment of internal loans

The Government has earmarked $124.6 billion to repay internal loans as follows:

Provision of $74.98 billion to cover the repayment of Jamaica dollar benchmark notes issued under the Jamaica Debt Exchange (JDX) initiative;

A further $26.12 billion has been provided for the repayment of US dollar benchmark notes under the JDX initiative, as well as $8.19 million to repay debt instruments denominated and payable in US$ issued in the local market by the Government;

$548 million has been allocated for the provision of the repayment of loans raised through local commercial banks re (i) Sugar Company of Jamaica (SCJ) loans assumed by the Government; and (ii) loans re the acquisition of motor vehicles for the police force;

An additional $111.5 million has been provided to repay promissory notes issued to, and loans raised from parastatal bodies including (i) repayment to the Development Bank of Jamaica and PetroCaribe Fund for debt assumed on behalf of the SCJ; (ii) reimbursement of taxes withheld on loan payments due to the National Insurance Fund (NIF) and other NIF investments; and (iii) payment to the National Housing Trust re Stadium Gardens and rehabilitation of barracks at Up Park Camp;

And $323.6 million has also been provided to meet principal payments re the invocation of government guarantees to accommodate a loan payment to the DBJ for SCJ Holdings Ltd.

b) Repayment of external loans

On the external debt repayment side, the majority of the increase in the allocations is accounted for in an $11.65-billion increase in the contingency allocation for "the execution of a liability management exercise". This is the second year in a row that such an allocation has been made in the finance ministry's budget. Last year an initial contingency allocation of $6.52 billion had been made, which was subsequently dropped from the Supplementary Budget. This year a significant $18.17 billion has been earmarked for the liability management exercise. This activity will be closely monitored by external investors and the rating agencies.

a) Interest payments re internal debt

In the provisions for interest payments re internal debt:

$79.6 billion has been set aside to pay interest charges on Jamaican dollar benchmark notes issued under the JDX, as well as a further $2.12 billion for the interest payment on locally issued US$ denominated loans raised for "budgetary and non-budgetary expenditures".

$340.6 million has been provided for interest payments to local commercial banks re loans assumed by the Government re the SCJ, and the existing loans re the acquisition of police vehicles; and

$892 million for interest payments on CPI-indexed investment notes issued under the JDX.

b) Interest payment re external debt

In the clearest sign to date that the Government has returned aggressively to the international capital markets, the Estimates of Expenditure includes a $2-billion provision for interested payments on "projected new borrowings from the international capital market", with an additional $1 billion earmarked for "the invocation of incidental expenses incurred in raising loans".

The finance ministry has also provided $2.725 billion as a contingency payment for "expected liability management", as well as a further $6.33-billion contingency for interest payment on guaranteed loans.