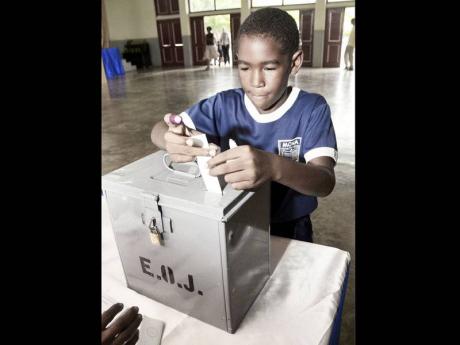 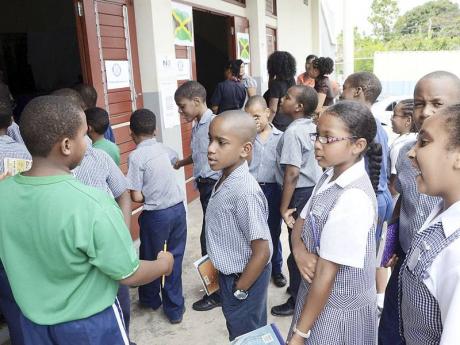 Members of the Mona Preparatory electorate wait to cast their ballots at the school's general elections for head boy and head girl on Wednesday. - Rudolph Brown/Photographer 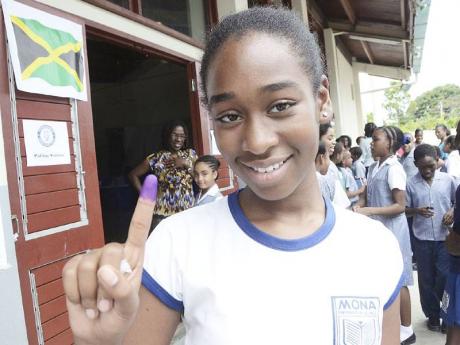 Grade-six student Aliya McFarlane-Sweeney is proud to show she had exercised her franchise.
1
2
3

By all indications, the general elections went very well - not that one, the one at Mona Prep on Wednesday.

For the first time in the school's history, students from grades-four to six, academic and administrative staff, put their 'X' beside the name of their choice for head boy and head girl of the institution. Teacher at Mona Prep, Nero Christian, who was director of elections for the day, explained that staff members were concerned that in the last two major national elections, voter turnout was poor.

"We believe that the students should be sensitised from early as to the responsibility they have to cast an opinion as to who should be the head of any organisation, whether their school or their country," he said.

He explained that, to ensure the elections did not become a popularity contest, staff pre-selected candidates.

"They (the candidates) did interviews. From that panel, we selected seven students - four boys and three girls, all of whom, we are confident, based on their performance, that any one of them, who won the elections, would give excellent representation to Mona Prep," he said.

The candidates were not allowed to do any open campaigning (so no gifts), but, on nomination day, were allowed to draw up their own posters.

Plus, each had to give a three-minute speech at the general assembly in the school auditorium, telling why they were the right boy/girl for the job.

"So the students have to use that (the presentation), as well as what they know of the youngsters (to decide). Also, what we have done from the start of the process ... each teacher uses some time in their class, especially in the social studies lessons, to sensitise them as to the importance of casting a vote and voting well," Christian explained.

The staff wanted the process to mimic the national general election as closely as possible, so they called the Electoral Office of Jamaica (EOJ) for advice. The response was beyond their expectations. The EOJ wanted to conduct the elections. Glendon Bennett of the EOJ, admitting it was a first for him, ensured the process was fair and free.

"We want to make sure the students do the right thing in terms of marking an 'X' for the candidates. We are also employing the use of the electoral ink to verify 'yes, I have voted' and we really want to sensitise them about the process."

A look around the polling station (the auditorium) showed this was no joke. EOJ workers were busily putting up voting-process instructions. Voting stations and ballot boxes were all set and there was no loitering at the station once ballots were cast.

The only thing they could not duplicate was election-day workers voting days ahead of time. Christian pointed out that since those workers were teachers, they wanted to get them all voting at once, so they went before the first students.

"We have about 247 voters. They were separated into five 'divisions', according to their various 'constituencies'. We have a polling clerk and a presiding officer for each area. We are doing the whole nine yards, including the dipping of the finger," Christian said.

To ensure that no one eligible to vote was left off the list, there was a numeration day, and three copies of the voters' lists were prepared, so in case any voter couldn't verify their name on a particular day, they were given every chance to do so before votes were cast.

"So we have not overlooked anyone who is in the qualifying group," he said. Based on the enthusiasm of students and, even more so, the staff, is confident the election will be a staple.

"We hope to make this a continuous event so the students ... can be well versed in the process."

When the final vote was counted, Nasib McDonald was declared head boy and Geossica Madden the new head girl of Mona Prep.