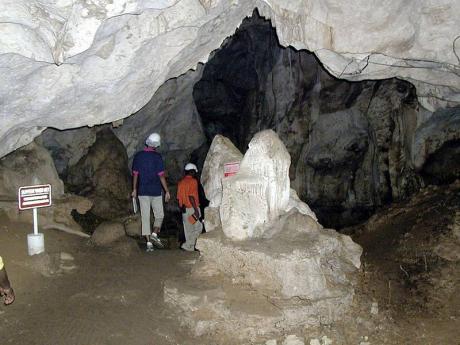 Inside the Green Grotto Caves. - File

Green Grotto Caves and Attractions is now the first tourist attraction in the history of Jamaica to receive platinum certification, representing 10 years of continuous certification with EarthCheck. The attraction received this certification in April and will be platinum-certified for the period April 2012-March 2013. It is situated on 64 acres of land in Discovery Bay, St Ann, between the resort centres of Ocho Rios and Montego Bay.

Fabia Lamm, manager of the attraction, expressed pride on behalf of her team for the achievement, which should result in higher visibility for Jamaica in the fast-growing global ecotourism industry. "This achievement is also significant in the context of our Jamaica 50 celebrations which aim to highlight the best of the nation since Independence," she further stated.

EarthCheck Certification, a programme managed by EC3 Global, is widely regarded as the largest certifier of sustainable travel and tourism businesses. EarthCheck is one of the world's most recognised environmental benchmarking and certification programmes.

The environmental efforts of Green Grotto Caves and Attractions have consistently exceeded best-practice standards, and once again enabled them to receive this prestigious certification. Platinum certification ranks the attraction as a leader in the unique worldwide group of sustainable tourism operators that are certified to the internationally recognised EarthCheck Company Standard.

Green Grotto Caves and Attractions was first successfully certified in 2002 and achieved Gold Certification in 2009.

Green Grotto Caves and Attractions has undergone extensive landscaping, improvements to the tour trail, the installation of special-effects lighting inside the caves, improved amenities, a snack counter and the recent opening of a logo and souvenir shop.

A tour of the caves enables visitors to journey into the underground and rediscover Jamaican history. Previously known as Runaway, Dairy, Rum, Hopewell and Dry Harbour Caves, the Green Grotto Caves are said to have provided shelter for Jamaica's first inhabitants, the Taino Indians. The caves boast a maze of stalactites and stalagmites, and other exquisite formations.

Rates for non-residents to access Green Grotto Caves and Attractions are US$20 (J$1760) for persons ages 13 years and over and US$10 (J$880) for children ages 4-12. Jamaican residents get a special rate.