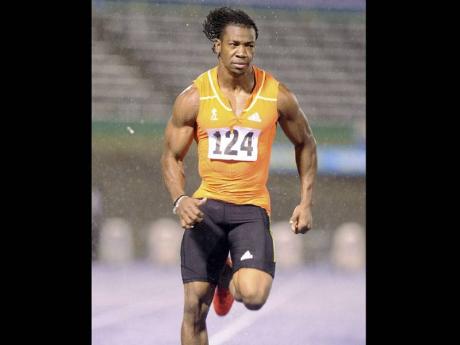 World 100 metres champion Yohan Blake stormed to the second-fastest time in the world this year to win the 100 metres at the Cayman Invitational here Wednesday night.

The 22-year-old clocked 9.84 seconds to finish ahead of fellow Jamaican Michael Frater (10.05) and Trinidadian Keston Bledman (10.06), who were second and third, respectively.

"Just the other day, I was telling Usain that I am going to come out here to show him something because we are friends like that," said Blake, who ran a world-leading 19.91 seconds at the same meet in Jamaica.

"I just came out here tonight to execute my race properly, even though there are things to work on, but the race was good overall."

Blake has installed himself as one of the main rivals to Bolt ahead of the London Olympics later this year, following outstanding performances last season.

Meanwhile, Jamaican Novlene Williams-Mills racked up her second win in a week when she took the women's 400 metres.

Bahamian Chris Brown took the men's equivalent in a time of 45.14, while countryman Ramon Miller (45.48) finished second, with Jamaican, Ricardo Chambers, third, in 45.87.

Former World sprint hurdles champion Ryan Brathwaite could only finish fourth as emerging star, Hansle Parchment of Jamaica, won that event in a time of 13.31 seconds.

Only last weekend at the JN Invitational, the American clocked a world-leading 10.81 seconds to win the contest in Kingston.