Nunes' Thorn will be a very lonely winner 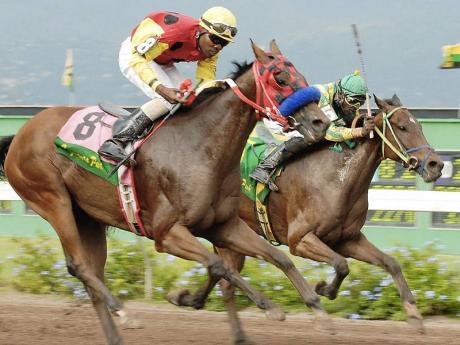 Despite a 99-1 upset by SKIPPING MICHELLE in the closing race at Caymanas Park on Wednesday, both the Pick-9 and second Super-6 were caught.

The Pick-9 offers the guaranteed minimum of $1 million, while both Super-6s start anew with $750,000 minimums. The Pick-9 will embrace two to 10, the first Super-6 from race one to six, the overlapping Super-6 from five to 10.

We look at the first Super-6 which gets under way with a 3-y-o and up maiden condition race over 1100 metres to be contested by seven starters - all America-bred horses.

Lightly raced SWEET RIVER from the stables of 14-time champion trainer Philip Feanny showed good speed on her recent debut behind SUNLIGHT EXPRESS over the straight. Now better for the experience, she is tipped to go all the way with 51.0kg and Paul 'Country' Francis aboard. I'VE BEEN CHOSEN (Shane Ellis up), who has his fair share of speed, should keep SWEET RIVER honest.

Next on the programme is Division I of the Percy Martin Memorial Cup for maiden three-year-olds over the straight-five course. Nine will face the starter, but from all indications it will take a brave punter to oppose THORN, a lightly raced colt who ran well (prominent) for third on his recent debut behind NUH VEX.

Trained by Anthony Nunes, THORN will report a lot sharper, and with Lasix administered for this race, the son of War Marshall looks a banker under champion jockey Dick Cardenas. VIBES MASTER should follow him home.

The two-turn specialist PRIME MINISTER, who was a convincing winner over this his favourite trip (1820 metres) on April 28, should prove too strong for the front-running ERGASIA and late-kicking SLEDGE in the third race to be contested by eight horses from the $450,000-$400,000 claiming group.

PRIME MINISTER, who was claimed by trainer Ryan Darby out of his last race, has won two of his last three races (with topweight) over this trip under leading jockey Dane Nelson, who again has the ride tomorrow. With a lot still in his favour, he is a confident selection.

Having finished a clear second to MERU some weeks ago, the Lee Clarke-owned-and-trained ORDEROFDISTINCTON, with 3.0kg claiming apprentice Chalrick Budhai, should win the fifth race, over 1800 metres for the former mayor of Kingston. Still, the 4-y-o colt can expect worthwhile opposition from Courtney Walsh's JAGSOVER (Cardenas up) and MONEYNEVERSLEEP (Nelson up) in a field of seven.

Then, close those Pick-6 bets with the Fitzroy Glispie-trained STOP A GAP, a lightly raced 3-y-o gelding who has not only worked well but returns on Lasix, in Division II of the Percy Martin Memorial Cup.