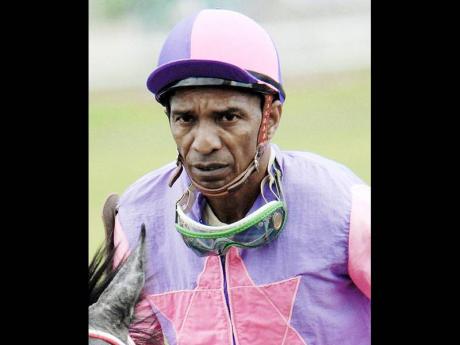 Leading all-time jockey, Hall of Famer Winston 'Fanna' Griffiths, was slapped with a three-day suspension by the stewards' for careless riding aboard the winning horse PRIESTKING in the eighth race at Caymanas Park last Saturday, resulting in the disqualification of his mount.

He was penalised for causing interference to the 8-5 favourite CUTTER in the final 200 metres, his mount running down under the right hand whip and forcing Rayan Wilson aboard CUTTER to snatch up his mount midway through the last furlong. The positions of both horses were reversed. Griffiths' suspension commences tomorrow.

He was suspended for two racedays for careless riding aboard LOVETTA JONES in the second race last Saturday, his mount causing interference to the winner MUMBAI MAESTRO, MACHISMO, RUN CHARM RUN and CASHMERE GOLD in the vicinity of the 1000-metre point. His suspension will take effect tomorrow.

Apprentice Chalrick Budhai also picked up two days for improper riding aboard KING SOLOMON in the fourth race last Saturday, the horse causing interference to SHEISMYHEART in the vicinity of the 400-metre point. His suspension takes effect tomorrow.

In addition, Budhai was severely cautioned by the stewards for his riding of DESIGN STAR in the second race last Saturday, his mount causing multiple interference in the vicinity of the 1000-metre point.