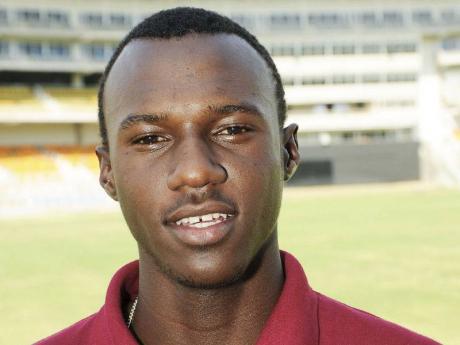 National and Hanover batsman, Jermaine Blackwood, has expressed his delight at capturing a match haul of nine for 43 against Trelawny in the opening round of the Jamaica Cricket Association Senior Cup last weekend.

The 20-year-old, who made his regional Super50 and four-day debut for Jamaica earlier this season, took six for 16 in the first innings and three for 27 in the second, with his part-time off spin to guide Hanover to a nine-wicket win over Trelawny at the Trelawny Stadium.

"It felt great as it was the first time I was taking nine wickets in a Senior Cup game," said Blackwood, who two weeks ago was invited to interview to be among the second batch of inductees to the West Indies Cricket Board Sagicor High Performance Centre.

"I went out there and put the ball in the right areas and used a lot of variation, and thankfully it paid off. I just hope that I will be able to continue, not just with the ball, but also with bat, which is my strong point."

Blackwood's haul, however, put him behind West Indies, Guyana and Kingston allrounder Narsingh Deonarine who picked up of 10 for 39 against Lucas at Sabina Park.

Meanwhile, Police batsman Gerald Laing came closest to scoring a century. He made a first innings 96 to lead his team to a 179-run win over St Ann at Kaiser Bauxite.

At Folly Oval: No play was possible between Portland and St Mary due to rain.