Mattocks off the mark 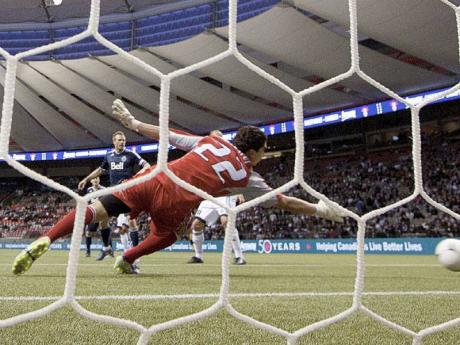 Jamaican rookie Darren Mattocks returned from a long injury layoff to score the first competitive goal of his professional football career on Wednesday night and helped lift his club Vancouver Whitecaps into the final of the Canadian Championship.

Mattocks, who entered the game as a 74th-minute substitute, fired a clinical first-time right-foot shot into the bottom corner of the net from a cutback pass by teammate Davide Chiumiento in the third minute of stoppage time. For the 21-year-old forward, the game was a welcome boost after being sidelined since March with burns suffered in a kitchen accident.

"To finally get back out there after seven weeks, that was really good for me and my confidence," Mattocks said yesterday, hours before departing for the United States where Vancouver play New England Revolution May 12 in Major League Soccer (MLS), North America's top professional football competition.

To score on his return, Mattocks explained, was an added bonus, but not surprising.

"It's something I expect," said the former Bridgeport High star who also attended University of Akron in the US. "Always, I tell myself if I get a minute, I'll score. It shows that at any given time all things are possible."

Vancouver won the game 3-1 to take the home-and-away tie 5-1 on aggregate against FC Edmonton and move into the two-leg final against Toronto FC (TFC), who beat Montreal Impact 2-0 on Wednesday after a 0-0 draw in the first leg.

Montreal and TFC also play in MLS. FC Edmonton are in the lower tier North American Soccer League. The first leg of the Canadian Championship final is scheduled for May 16 in Vancouver.

Mattocks was selected second overall by Vancouver in the 2012 MLS SuperDraft earlier this year, but had not played competitively since the accident, just two games into Vancouver's season. He had appeared in only one MLS game up to that point. However, he earned praise from coaches and teammates for Wednesday's performance.

"It was good to get Darren Mattocks and (substitute) Etienne (Barbara) into the game after they have been out with injuries," Vancouver head coach Martin Rennie told reporters at a post-match press conference. "I thought they contributed a lot."

Prior to Mattocks's entry, FC Edmonton had taken a 1-0 lead, cutting Vancouver's overall advantage. According to teammates, Mattocks, Etienne and two-goal hero Sebastien Le Toux injected the needed spark into the team off the bench.

"The game can be changed by subs," Vancouver's Jay DeMerit explained at the press conference. "(Wednesday) that was the big change that we needed ... to get couple goals by the subs, and the way they showed character to come on and change the game was the biggest plus."

Mattocks had hoped to return for Vancouver's May 5 game against San Jose Earthquakes. However, he was not named in the game-day squad.

"They decided to give me one more week to get ready," said Mattocks, who has been called up for Jamaica's May 18 friendly international against Guyana.

He is unsure how much playing time he will get against New England, but remains confident he will produce if given the opportunity.

"Once I stick to my game play and the coach's game plan I'll be OK," Mattocks said.