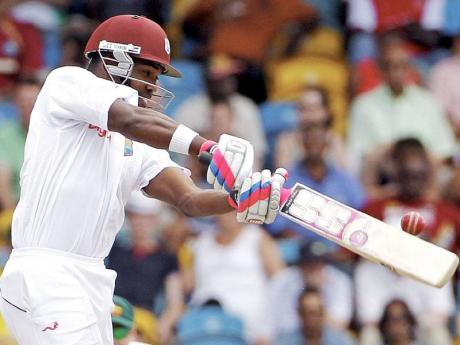 Asked to bat in blustery conditions at Wantage Road, West Indies fell for a paltry 147, with Bravo top-scoring with an attractive 51.

In reply, the Lions had reached 40 for one when bad light halted play late in the evening.

Fast bowler Fidel Edwards took the lone wicket to fall, that of Joe Root who played back to one that kept low and was lbw for three at six for one in the third over of the innings.

Nick Compton, 18 not out, and opener Michael Carberry, 15 not out, were together at the close.

In their first real outing of the tour and the last before the first Test next week, West Indies struggled early on against the Lions' seamers and slumped to 29 for four before being revived by a 75-run fifth wicket stand between Bravo and Marlon Samuels, who scored 32.

Once the partnership was broken, however, the Windies collapsed in a heap, losing their last six wickets for 43 runs.

Bravo's innings brightened an otherwise dour day for the tourists who looked ill at ease in unfamiliar conditions.

Unflustered by proceedings, however, the left-hander calmly went about stroking nine fours off 90 balls in 130 minutes at the crease.

The majority of his boundaries were exquisite cover drives in front of square on the off side as he played with authority against the all-seam attack.

Their partnership was required after West Indies were rocked early by the loss of quick wickets.

Opener Adrian Barath (8) played one authoritative cut for four off Dernbach before edging Brooks to third slip in the next over for Compton to take a smart catch low to his left, at 12 for one.

Five balls later in the next over with four runs added, Kieran Powell was taken behind off Dernbach, prodding at one that left him (2), and stand-in captain Kirk Edwards fell without scoring when he edged Brooks to Ian Bell at second slip, with no addition to the total.

West Indies then lost the key wicket of veteran left-hander Shiv Chanderpaul who lobbed an easy catch to Brooks at short-midwicket off Coles, as he tried to bail out of a pull shot.

Bravo and Samuels then carried the Windies to lunch on 51 without further loss and flourished afterwards, both batsmen playing positively.

However, Bravo played one shot too many and miscued a pull off Meaker to Brooks at midwicket at 104 for five, and Samuels followed 13 runs later, caught behind stabbing at one from Meaker that swung.

The end came swiftly for the Windies as Meaker bowled Shane Shillingford for two and Denesh Ramdin's drive at Coles was taken at gully by Root, after the batsman hit three boundaries in 17.

Kemar Roach missed a drive at a straight one from Brooks and was lbw for 13 before Ravi Rampaul top-edged a slash at Dernbach and was caught behind for five by wicketkeeper Jonny Bairstow.