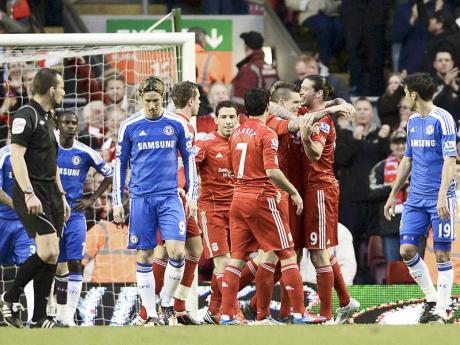 Manchester City always seems to be second best in their own backyard, like a little brother overshadowed by his bigger and stronger sibling.

He's already done the things you want to do, and has done them better anyway. And when you finally do something he hasn't done? Well, he'd probably beat that, too.

What happened when City won its most recent English league title in 1968? United won the European Cup, the most prestigious trophy in club soccer.

The season City was promoted to the Premier League after four years away? United won it, for the 13th of its 19 league titles.

That time City convinced Argentina striker Carlos Tevez to ditch United and move across town? United still beat City in the League Cup semi-finals, and went on to win the trophy.

United's dominance over its neighbour was even on display at Old Trafford, the stadium nicknamed the 'Theatre of Dreams'. Hanging from the stands was an annually updated banner counting the years - it had reached 34 when it was finally brought down last season - since City last won a trophy of any kind.

But little brother looks set to come out on top Sunday in the world's most popular league. After decades of watching its biggest rival lift trophy after trophy, City can win the English Premier League title in its final match of the season with a victory against struggling Queens Park Rangers.

"I came to City to make history,'' said Yaya Toure, the driving force in City's midfield. "I want to win it for our fans.''

Satisfyingly for those fans, there is almost no chance of being upstaged this time because of United's failure to win the Champions League or either of England's domestic cup competitions. Instead, City can become English champion for the first time in 44 years and leave United empty-handed for the first time in seven seasons - a remarkable reversal in a city where red has been the colour of success for more than a generation.

"Forty-four years is unbelievable,'' Toure said. ''It is too many years.''

The difference is money

The difference these days, of course, is money. City's abundance of it and United's lack of it.

While United is still paying interest on debt incurred in the 2005 takeover by the Glazer family that also owns the Tampa Bay Buccaneers, City has spent about $635 million on new players since being bought by in 2008 by Sheik Mansour, a member of the Abu Dhabi ruling family.

"No one can match their financial resources. No one,'' United manager Alex Ferguson said. ''We have to accept that and try to do things in a different way.''

City, however, knows all too well that money doesn't necessarily bring success. After all, in 1979 the club paid a British record at the time of about $3 million for Steve Daley. The midfielder buckled under the pressure of the giant fee and left for the Seattle Sounders in the NASL 20 months later, his European career in ruins.

What matters this time around is that City has spent money well.

Despite the flop of Brazil striker Robinho after a British-record $60 million transfer from Real Madrid, the Abu Dhabi United owners were undeterred.

Tevez and Argentina teammate Sergio Aguero were brought in, backed up in attack by Italy firebrand Mario Balotelli. And even Edin Dzeko, a Bosnian who is the least known and least trumpeted member of City's forward quartet, has 13 Premier League goals this season - more than any United player other than Wayne Rooney.