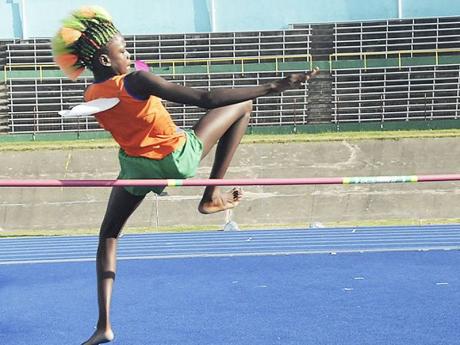 Wayne Pinnock of Clan Carthy and Dana Thomas of Naggo Head flourished as they captured the boys' and girls' long and high jump, respectively, on yesterday's second day of the four-day Institute of Sports (INSPORTS)/Swizzzle Primary Schools Athletics Championships at the National Stadium.

Pinnock leapt 5.19m to win his event ahead of Ackeem Sinclair of St Benedict's (4.98m) and Shane Pitter of Spanish Town Primary (4.92m). The 12-year-old Pinnock was delighted with his achievement.

"I felt very good after winning the gold medal," Pinnock, who is an admirer of the world's fastest man, Usain Bolt, said. "I trained very hard to win this event and so it wasn't difficult for me to win it," he added.

Thomas cleared 1.45m to capture her event ahead of Brianna Boyd of St Patrick's (1.40m) and Octivia James of Harbour View (1.35m).

Thomas was also very elated about her success. "I am very happy," said Thomas. "I went out very focused to win the event because I wanted to make my coaches and parents very proud of me," said the 11-year-old.

"It was very difficult at first, but my coach (Floyd Coke) told me to stay focused and I did that, and so I was able to win the event," she added.