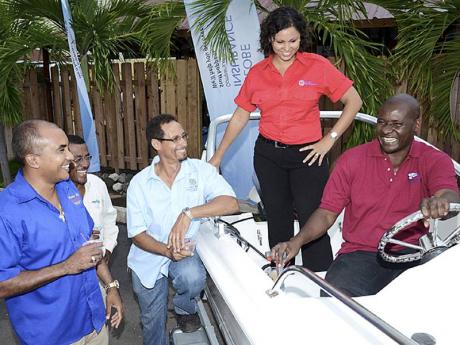 Globe Insurance Marketing Manager Lisa Hogarth and Royal Jamaica Yacht Club (RJYC) Commodore Angus Gordon look ready to go boating prior to the launch of the 11th annual Globe Insurance/RJYC Fishing Tournament at Chaser's Cafe on Wednesday, May 9. Looking to join in on the fun (from left) are Ray McMaster, Dermoth Bingham and Peter Cowan. - Contributedphotos

The two-day staging of the 11th Globe Insurance/Royal Jamaica Yacht Club (RJYC) Tournament will cast off this morning with a number of the country's top fishing enthusiasts matching angling skills, as they vie for the top prize of $150,000.

The fishers are slated to drop their lines at 5:30 a.m. but must return to the weighing station, which is based at the Royal Jamaica Yacht Club, by 6 p.m. The participants are then free to resume fishing, or they can opt to resume on Saturday morning, but should ensure that they return to the yacht club by 5 o'clock Saturday evening.

The organisers are, however, urging the contestants to stick around at the yacht club and participate in a new feature of this year's staging, which is a kiddies 'Off the Wharf' fishing competition and fish fry. The kiddies competition will take place from 4 o'clock to 6 o'clock this evening, while the fish fry will commence at 5:00.

Another adjustment to this year's tournament is an amendment to the rules to allow for the jackfish to be caught. This type of fish will fall in the pelagic species category and will be worth one point, as opposed to the bottom fish species which will be worth two points.

The competition's commodore, Angus Gordon, explained the reason for the adjustment to the rule, which will now see no weight limit for fishes caught.

"There are a lot of jacks out there and people were saying that it is a fish that should be eligible and by consensus we have agreed to have it," Angus explained following Wednesday night's Captain's Briefing and launch held at Chaser's Cafe.

A total of 11 teams have entered the tournament which has no boundaries, hence allowing participants to go as far out at sea as they desire. The organisers were hoping for a 100 per cent increase this year, but at press time only 10 entrants paid the fee of $25,000 for boats over 26 feet and $20,000 for boats under 26 feet, with another 10 teams having committed.

Defending champions Team Integrity, captained by Peter Cowan, is fairly confident that he and his other four team members can defend their crown.

"I think we have about a 99 per cent chance of successfully defending our title, and we definitely will be doing our best," Cowan stated. "We work well as a team and we go out and enjoy ourselves," he added.

Lisa Hogarth, marketing manager of title sponsors Globe Insurance, is pleased with her company's 11-year association with the tournament.

"We have been on board as title sponsors for 11 years and it has been 11 wonderful years," Hogarth proudly declared. "We like to support the people who support us, and a number of the boats at the Royal Jamaica Yacht Club are insured with Globe, so we give back to those who insure with us," she added.