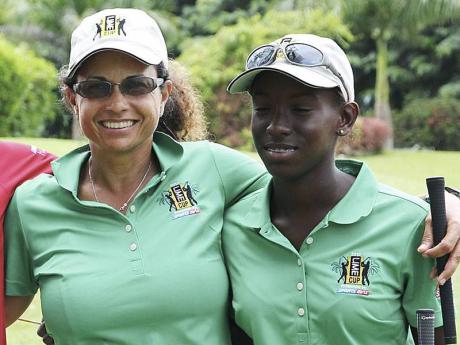 JustBet Spring's Michelle Gabay (left) and Kei Harris at round one of LIME Cup last Sunday.

First-time entrants CEEN Falcons and JustBet Springs were the toast of last weekend's opening round of the 2012 LIME Cup golf tournament at the Caymanas Golf Club.

CEEN registered wins over SportsMax MaxPak and former champions The Buccaneers of Appleton Estate, while JustBet were victorious in the matchups against LIME Lions and SportsMax MaxPak.

They, however, had a closer contest in the second match against The Buccaneers after coming out on top 3-2.

JustBet, meanwhile, recorded a solid 7-3 win over the LIME Lions in round one before going on to claim a 4.5- 0.5 win over SportsMax MaxPak in round two.

Meanwhile, round one's high-profile clash between the Advantage Generals and the Buccaneers saw the latter coming out on top 6-4.

The Generals, however, did not leave empty-handed, as they defeated LIME Lions 4-1 in their second match.

Rounds three and four will continue at the Constant Spring Golf Club on May 20.

The unbeaten CEEN and JustBet will face off in the marquee matchup of the early tee off, while the Advantage Generals will go up against SportsMax.

Appleton Estate will face LIME in the round's other matches.

JustBet will then play the Advantage Generals, LIME will take on CEEN, and Appleton Estate will face the SportsMax MaxPak.