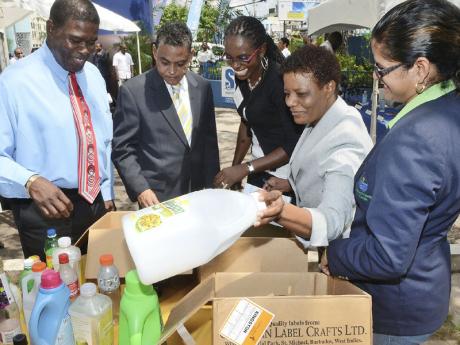 Executive director of the National Solid Waste Management Authority (NSWMA), Jennifer Edwards (second right), shows the types of plastic containers that will be collected under the Plastic Container Separation Pilot Project. - see full caption at the end of story.

If all goes well, Jamaica will have an effective national plastic container separation programme by the next financial year.

That's the hope of Local Government Minister Noel Arscott, who was speaking at yesterday's launch of the Plastic Container Separation Pilot Project, to be run by the National Solid Waste Management Authority (NSWMA). Arscott read from a 2006 NSWMA study that said over one million tonnes of waste was generated from residential, commercial and industrial institutions, 14 per cent of it plastic. He stressed the benefits of plastic recycling.

The three communities chosen for the pilot are Karachi, Havendale and Whitfield Town. Executive director of the NSWMA, Jennifer Edwards, said that the issue of recycling and separation is not new but it was time to learn more.

"We believe that we need to gather that data now to get a feel as to the amount that is out there to be recycled and for the willingness of the citizens to participate in this process," she said. Edwards admitted the NSWMA couldn't successfully collect, transport and manage all the waste at the disposal site, at least not without tremendous cost.

"And so the matter of separation is one that is critical and important," she said. She explained that residents will separate their plastics from their other waste, the NSWMA will provide the containers and will collect the garbage at designated times. The first pick-up was on Thursday. The areas were selected from a pool of communities that covered the various socio-economic strata. The project is for six months in the first instance, but Arscott noted that it would be moving into other regions, especially targeting schools, where they will teach children how to separate plastic from other solid waste.

Edwards explained there will be at least one project in each parish in the western region with one project in the three remaining regions, perhaps in St Ann (north), Manchester (central) and Portland (east). All projects are likely to overlap.