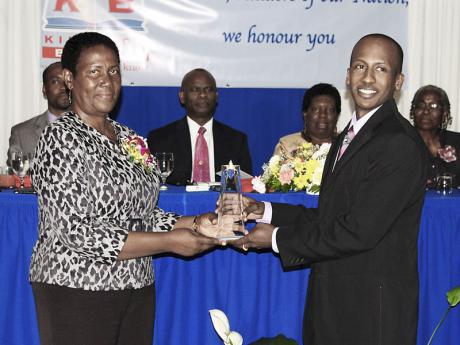 Jean Porter, principal of Denbigh High, collects memorabilia from Steadman Fuller Jr, director of Kingston Bookshop, which honoured her and other teachers at a recent luncheon in Mandeville.- Photo by Dave Lindo

MANDEVILLE, Manchester:ONE OF The celebrated names in education in central Jamaica is Jean Porter, principal of Denbigh High School, who was recently honoured by the Kingston Bookshop in appreciation for her outstanding work in education.

Porter is from the rural community of Colonel's Ridge in Clarendon, where she attended Mount Caramel All-Age School before going on to Clarendon College.

With a strong desire to be a teacher, she enrolled in the Shortwood Teachers' College where she majored in social studies and English language.

After leaving Shortwood, she joined the staff of Denbigh High, then Denbigh Junior High in 1976. Speaking of those early days, she said, "Basically, we learned from the senior teachers, who made us feel at home, and we gained confidence from that."

It was to be the beginning of an undying love affair with the school located in Denbigh, Clarendon, as she has never worked at another school.

While putting in some hard work at Denbigh, Porter advanced her studies at the University of the West Indies where she obtained a bachelor's degree and moved on to complete her Masters in Educational Administration in 1997.

Through her commitment and dedication to her students and her remarkable leadership qualities, she was appointed as vice-principal, a position she held for over 19 years. As vice-principal, she served as deputy for another stalwart in local education, Joan Wint, who served as principal of the school for 23 years.

Porter was appointed principal of Denbigh High in 2008 and was given the responsibility of taking the school to higher heights. Through continued hard work with staff, parents, and teachers, Denbigh became one of the best high schools in central Jamaica.

The hard work has since paid off and currently, Denbigh ranks in the top 10 high schools in Jamaica based on Caribbean Examinations Council results. It is seen as a significant achievement for a non-traditional high school which is coming from junior high school status.

Explaining the secret to the success of Denbigh High, Porter said: "I value team work. As the cliché says, the chain is as strong as its weakest link. No one person has done what is done at Denbigh. It has been a team effort and has always been."

Denbigh has also seen improvements in areas of technology, with equipped computer labs and multimedia rooms. The school has an ever-expanding sixth-form programme. It also facilitates tertiary-level education, as in 1996, it became a distance-education centre for the University of the West Indies. The centre offers certificates, diplomas, and degree programmes.

A key to Porter's outstanding leadership has been discipline. "If you play, play hard, but when you are working, don't play at all. It is a principle that I have adopted from my high school days at Clarendon College, and I have imparted to my students at Denbigh," she said. "Discipline is the key to the success at Denbigh. It is something I have stood for throughout my tenure at the school."