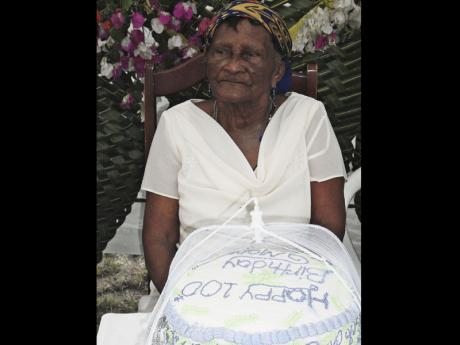 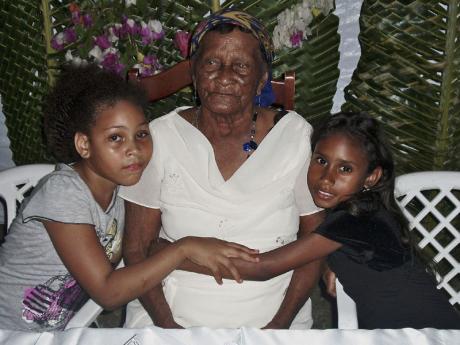 TREASURE BEACH, St Elizabeth:On MAY 2, 1912, in Jamaica, approximately 100 years ago, Veronica Adina Buchannan was born. Having lived for a century, her family fêted her to a birthday party last Saturday at her home in Billy's Bay near Treasure Beach

The Gleaner spoke to relatives and friends about Miss Adina, or Nicole, as she is called. Many of them were in awe that someone they knew had lived a century; many grudgingly expressed the hope of longevity for themselves. One resident described her as a mother to all in the community.

Her biological offspring includes eight children, 30 grandchildren, 47 great-grandchildren, and 24 great-great-grandchildren. And she has outlived two partners and a son. Her big family might be surprising to many as she is an only child who was reared by her grandparents. She only saw her mother twice during her very long life. This did not affect her maternal instincts as her children said she was a good mother who has, in turn, assisted with their children.

Typical of many rural persons of the past century, Miss Adina had limited finances. However, she did whatever she had to in order to provide for her children. Avril, her daughter, stated that on many occasions, her mother deprived herself to ensure that they had whatever they needed. She was supported by Estella, who disclosed that her mother pursued a number of occupations such as working for a limestone dealer, farming, domestic work, and midwifery.

Miss Adina was primarily known for her midwifery skills, which she inherited from her grandmother. As a result, many residents were delivered by her, including some of her own grandchildren.

A neighbour, Mercinia Nemhard, related: "When I had my second child, she was the one who delivered me. There was a midwife, but she wasn't here at the time." Nemhard said Miss Adina always followed up her cases by providing the required post-natal support.

Miss Adina's midwifery services were not limited to persons. Sarah Clarke, another resident, related an experience where one of her mother's goats was having a kid and experienced difficulty, and Miss Adina assisted the goat in having a successful delivery.

Miss Adina was a disciplinarian. Her son maintains that those lessons have helped them to be good citizens. Estella said they had to be disciplined in the area of dating as her mother was strict and prohibited them from openly dating. "We couldn't talk to boys mek shi see," Christine Taylor, a grand-daughter, attested to Miss Adina's nonsensical approach. Taylor said they were forbidden from going to the sea unsupervised, however, since it was very close to their residence, they defied the rules. She said her grandmother had a very interesting way of finding out they had gone to sea by checking to see if salt was on their skin, after which she would discipline them with the strap.

Miss Adina is very religious. Taylor told The Gleaner that currently, her grandmother has her devotions daily and she can talk about the Bible from Genesis to Revelation. This was endorsed by Avril, who said that Miss Adina was very proficient in making reference to unpopular passages. Nemhard said Miss Adina puts her beloved scriptures into practice by always giving encouragement. If people in the area have problems, she would be the one to mediate, Nemhard pointed out.