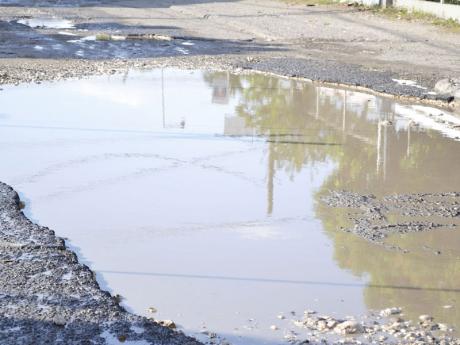 A pothole filled with water at the intersection of Kew Road and Ballater Avenue in St Andrew has been forcing motorists to use the sidewalk. The road has been a state of disrepair for a number of years.- PHOTO BY ERROL CROSBY

MANDEVILLE, Manchester:OUR 50TH anniversary to celebrate our Independence is just around the corner, and I was hopeful that Jamaica would be free from potholes to meet this special anniversary, however, based on my conversation with Anthony Hughes, the Manchester parish manager for the National Works Agency, it does not seem that our roads are going to be free of potholes and manholes anytime soon as he outlined how the Government is strapped for resources to patch potholes, fix manholes, and to clean drains and gullies.

Jamaica can be described as a reactive society. We do not believe that a stitch in time can save us from having to put in nine additional stitches. So we always wait until a crisis develops before we move into action. It is when our roads are in the most deplorable condition that we then take to the streets to protest and block roads with garbage and debris of all types.

I am of the view that the people who put themselves up for election to be our leaders do not love the people they are elected to serve. Jamaica's problems are generations old and yet we seem contented to live with them.

The cause of this dilemma is primarily because individually, we are all doing fine. Every Jamaican can "eat a food" every day, find shelter from sun and rain, and also find enough cloth to cover the private parts. So the average Jamaican is free, most times single and disengaged, or disconnected from taking responsibility for anything that does not affect him personally. We are, therefore, not a homogenous society — we are just 2.7 million people who happen to live on an island called Jamaica. Many of us "nuh business wid nutten", and this includes the condition of our roads, manholes, drains, and gullies.

Those who are compelled to pay taxes through the pay-as-you-earn system have the attitude which says that the Government must fix everything. So if the potholes on our roads could be eliminated with everyone contributing a bag of cement, some marl, water, and sweat equity, they will not be eliminated because "wi pay wi taxes". Therefore, when it is flood and hurricane season, who fi flood-out, have to flood-out, and who fi drown, have to drown.

Thank God that there will always be concerned citizens who know the value of having properly maintained roads and who want to help increase the economic and productive capacity of the country, Mrs Diana McIntyre-Pike, president of the Countrystyle Community Tourism Network Villages As Businesses (CCTN/VAB) initiative, feels that we urgently need a potholes and manholes fund, which would be used to maintain our roads and improve the quality of life for every Jamaican. As a member of the tourism industry, she explained that our overseas visitors would be able to enjoy more of the island, but many are terrified of driving on our roads as they have to concentrate on dodging potholes instead of admiring the beautiful sceneries and vistas situated all over Jamaica. She pointed to comments by local chiropractor, Dr Michal Harvey, that many Jamaicans have serious back problems due to accidents caused by our bad road conditions.

The CCTN/VAB organisation is proposing that this fund seek contributions from local and overseas Jamaicans who are committed to the improvement of Jamaica and its infrastructure. The fund could be managed by the Jamaican diaspora in association with non-governmental organisations and other community-based organisations.

Many concerned citizens are in full agreement that after successive governments, nothing tangible has been done to alleviate the deplorable conditions that our main and parochial roads are in. After 50 years of Independence, it is full time that we emancipate ourselves from this pothole and manhole crisis.