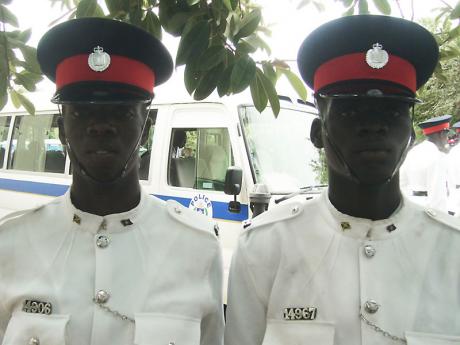 From the same high school in St Mary they have graduated, and on Friday, April 27, they graduated top of the 100th batch from the Jamaica Police Academy. 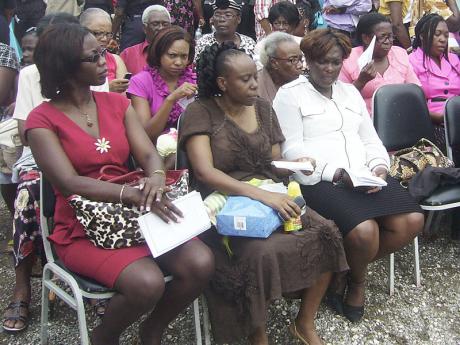 A section of the huge crowd that attended the passing-out and awards ceremony held on Friday, April 27, at the Jamaica Police Academy. 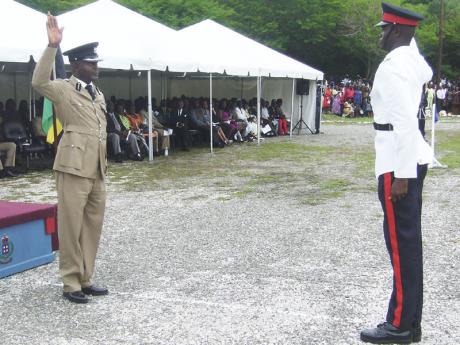 One is going out, the other is going in. Retiring ACP Derrick Shand (left) and his son Rehum salute each other at the passing-out and awards ceremony for the 100th batch of constables at the Jamaica Police Academy, Twickenham Park, St Catherine, on Friday, April 27.-photos by Paul Williams
1
2
3

TWICKENHAM PARK, St Catherine:THEIR WHITE tunics glistened under the morning sun as sweat trickled down their stoic faces. And in the sweltering heat the 197 constables sat, listened, watched, and participated in perhaps the biggest day of their lives, so far, on Friday, April 27, at Twickenham Park, St Catherine. It was the 100th batch to pass out of the Jamaica Police Academy since 1981.

Expectedly, pageantry and salutes were the order of the brief ceremony, which was addressed by Minister of National Security Peter Bunting, the keynote speaker, who also doubled as parade reviewing officer. The activities started with a performance by the Magnificent Troopers, with the Jamaica Constabulary Force Band under the baton of DSP Winston Woolcock, assisted by the ISCF Corps of Drums, providing music for the rest of the proceedings. Near to the end, moving and synchronising to music, the 197 constables formed the number 100, symbolic of their batch.

In addition to the basic training certificates, awards were given to exemplary student constables: Cleon Dwyer and Ovell Burton for Best Christian Principles; Erak Newman and Simba Anderson for Best Leadership Qualities; Shimron Walker and Raymond Johnson for Highest Marks Obtained; and Hugh Lewis and Ricardo Smith for Best Shot. A special award was given to Rehum Shand by his father, retiring ACP Derrick Shand.

On hand to witness the occasion and show support were throngs of relatives and friends from all over the country, some turning up after the ceremony was finished. Of note, Constables Shimron Walker and Raymond Johnson, who obtained the highest marks, are from St Mary and attended St Mary High School.

After the formalities, the graduates, comprising eight squads, were taken to an area where the morning's performance was reviewed and critiqued. Group photography followed, after which they were released to their friends and loved ones, who hugged, kissed, shook hands, and cried. The constables will assume duties today at various stations across the island. The real test has begun.