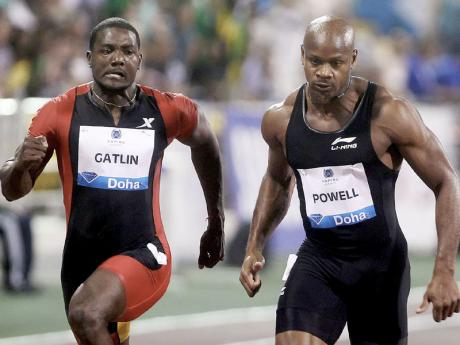 American Justin Gatlin (left) getting the better of Jamaica's Asafa Powell in the men's 100 metres at yesterday's IAAF Samsung Diamond League track and field meet in Doha, Qatar. Gatlin clocked 9.87 seconds with Powell just behind in 9.88. Another Jamaican, Lerone Clarke, was third in 9.99.-AP 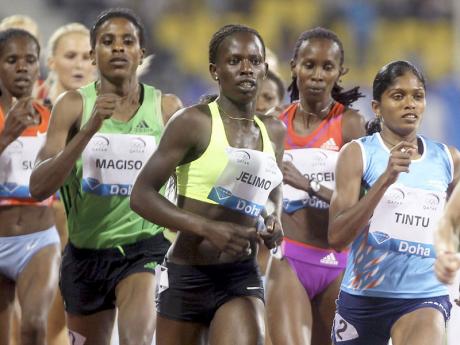 Pamela Jelimo (centre) of Kenya on her way to a fast-time win in the women's 800m at the IAAF Diamond League track and field meet in Doha, yesterday. Jelimo clocked 1:56.94.-AP 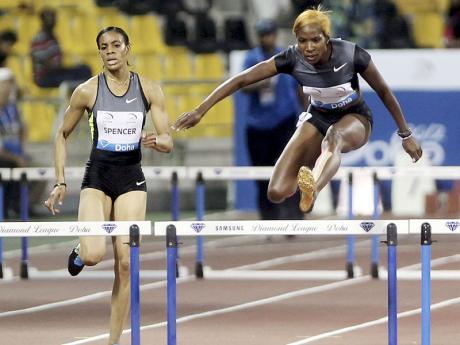 Powell, who complained of suffering from jet lag, got off to the faster start but Gatlin pulled even and managed to get his head in front as they crossed the line. The winning time was 9.87 seconds with Powell just behind in 9.88.

"This is fastest I ever opened up my career,'' said Gatlin, who dedicated the win to son Jace on his second birthday.

"I just showed I have a lot of grit and a lot of competition in these old legs," Gatlin said. "I want to come back and show the world I can run to the line with the best of them. If Usain Bolt has been watching, you know it has been great racing against him, but I want everyone to know Justin Gatlin is back, and I want the Olympic title," said the American.

Powell, who has lost to Gatlin seven times in 10 meetings, said he wouldn't let it happen the next time.

gearing up for Olympics

Gatlin and Powell are gearing up for the London Games. Olympic champion Usain Bolt skipped the meet, along with Tyson Gay of the United States, who is recovering from injury.

Gatlin tied Powell's then world record in Doha six years ago, but the result was erased when he was caught doping a few weeks later. Gatlin tested positive for excessive levels of testosterone, which led to a four-year ban.

Three other Jamaicans faced the starter in the event. Commonwealth Games and Pan American champion Lerone Clarke equalled his personal best 9.99 to place third, while Nesta Carter was fifth in 10.05 and Jacques Harvey seventh in 10.14.

Felix, who may run the 200 and 400 metres at the London Games, showed she is starting the season in shape.

"I know my speed was coming on and I was just focused on putting it together technically, so it was pretty cool to come in here and win," said Felix, who has won more races than any athlete in Doha.

Campbell-Brown, who had beaten Felix in all five of their previous 100m races, said she "could improve" and would "keep working until the Olympics".

Both Walker and Foster-Hylton continued their impressive early-season form in the hurdles. Walker, winner at the 400m hurdles at last weekend's Jamaica Invitational in 55.28 seconds, clocked a world-leading 54.62 yesterday to lead home compatriot Kaliese Spencer, 54.99, and Britain's Perri Shakes-Drayton, 55.25. Stephanie McPherson, another Jamaican, was eighth in 58.61.

Foster-Hylton, who breezed to 12.51 seconds at the National Stadium on May 5, was again a runaway winner of the 100m hurdles yesterday. Her 12.60 placed her well ahead of American Kellie Wells, 12.72, and Canada's Phylicia George, 12.79.

Jelimo, the Olympic champion, was pushed to the limit by 19-year-old Ethiopian Fantu Magiso before crossing the line in a meet record 1:56.94. Magiso registered a national record 1:57.90 while another Kenyan, Janeth Jepkosgei, was third in 1:58.50.