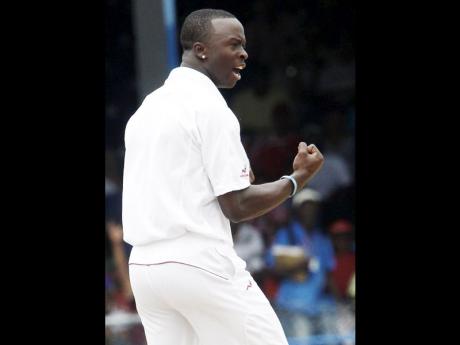 NORTHAMPTON, England (CMC):Embattled West Indies were facing the prospect of an innings defeat after their bowlers let England Lions off the hook and their batsmen then suffered their second collapse in as many days, on the second day of their four-day match here yesterday.

Captain James Taylor stroked a fine 118 as the Lions, resuming on their overnight 40 for one, recovered from a precarious 98 for five before lunch to post 341 all out in good conditions at Wantage Road.

Trailing by 194 runs, West Indies again collapsed to end the day on 28 for three, still 166 runs adrift of making the Lions bat again.

Left-handed opener Kieran Powell was not out on eight and was partnered by Darren Bravo who is yet to score.

The day started well enough for the Caribbean side who made key early strikes in snatching four wickets for 58 runs to put the Lions on the backfoot.

In just the fourth over of the day, Roach breached Nick Compton's defensive prod to clip his off-stump after the right-hander had added three to his overnight 18 at 55 for two.

Opener Michael Carberry, who struck 32, and Test batsman Ian Bell, who got 29, then put on 37 for the third wicket before Rampaul instigated a slide where three wickets fell for six runs in the space of 18 balls.

The left-handed Carberry, resuming the day on 15, hit four fours and a six off 93 balls before edging Rampaul to first slip where Shiv Chanderpaul held the offering at 92 for three.

Bell, who stroked three fours and a six off 54 balls, then followed in Rampaul's next over, bowled by a peach that sneaked through between bat and pad.

When Shillingford induced a caught and bowled as Samit Patel (4) checked his drive, West Indies were in control of the game.

However, Taylor then wrenched the advantage from their grasp in a sixth-wicket stand of 107 with wicketkeeper Jonny Bairstow, who stroked an even 50.

The 22-year-old right-hander, who has already played a one-day international, faced 179 balls in 268 minutes at the crease and counted 13 fours.

Bairstow, meanwhile, hammered six fours off 93 balls in just over two hours at the crease and when he and Matt Coles (0) fell in the space of 10 balls at 211 for seven, Taylor skilfully anchored three more partnerships with the tail, to further frustrate the Windies.

Taylor should have gone on 104 when he was held at slip off Edwards but the pacer overstepped the front crease, one of his eight no-balls and 17 sent down by the Windies attack.

The frustration continued in their second turn at the crease when fast bowler Brooks claimed both Adrian Barath (14) and stand-in captain Kirk Edwards (4) leg before wicket to leave the Windies on 25 for two.

There was time for another wicket, however, as nightwatchman Fidel Edwards was bowled by seamer Coles without scoring off the second ball he faced.

The match is the final warm-up before the first Test which starts at Lord's next Thursday.

England Lions 1st innings(overnight 40 for one)