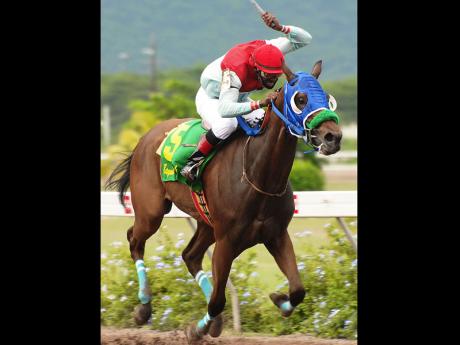 Although the three-year-old maiden special for the Percival Martin Memorial Cup to be run in two divisions is today's feature at Caymanas Park, the focus of attention will be on the open allowance race over 1820 metres.

This race pits the recent 2000 Guineas winner UNCLE DONNY against such proven campaigners as EMPEROR HALL, a runaway winner of the CTL Imported Mile last November, the American 4-y-o colts REASONABLE PRESS and MIKENIFICENT, as well as CLASSIC BEAU and VONALMIGHTY.

The abovementioned horses should ensure a highly competitive race, with EMPEROR HALL, REASONABLE PRESS and UNCLE DONNY expected to carry the bulk of the betting.

The Anthony Nunes-traned 3-y-o colt UNCLE DONNY won the 2000 Guineas over a mile in convincing fashion, clocking the fairly good time of 1:39.3. But in a surprise move, his connections have elected to bypass next Saturday's Lotto Classic (Governor's Cup) over 2000 metres in order to undergo his Derby prep in this tough field.

UNCLE DONNY, I believe, can hold his own at this level. Trouble is he comes in pretty high at the weights with 55.0kg and I can't see him beating either REASONABLE PRESS or topweight EMPEROR HALL (57.0kg).

The Noel Ennevor-trained EMPEROR HALL (Shane Ellis up) is out for the first time since chasing home the illustrious MARK MY WORD in the grade one Harry Jackson Memorial Cup over 2400 metres last Boxing Day, but he represents the class horse of the field and can surely impact on the outcome. Whether he can successfully allow REASONABLE PRESS 6.0kg with Paul 'Country' Francis up is left to be seen.

The bay colt stayed on strongly on the heels of the unbeaten BLAST THEM AWAY when finishing second in the King's Plate over 1500 metres on April 21 and having turned in bullet work after bullet work at exercise in preparation for this race, gets the nod over EMPEROR HALL.

Elsewhere on the 10-race programme, the lightly-raced THORN (Dick Cardenas up) and STOP A GAP (Paul Francis) should win their respective divisions of the Percival Martin Memorial over the straight five course.

I also like PRIME MINISTER to repeat in the third race, PRINCESS AMOYA (fourth), CANTARE (seventh) and RIFLEMAN (10th).