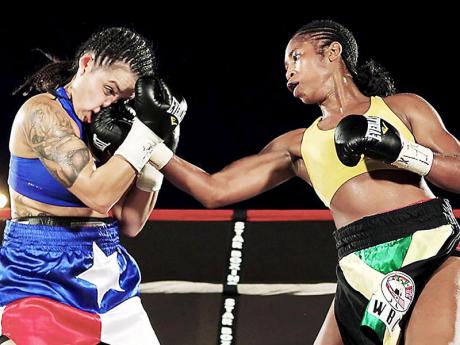 "Very disappointed," were the words of Jamaica's World Boxing Council (WBC) super bantamweight champion, Alicia Ashley, when she was told that her title fight against Ann Maria Torres, scheduled for June 2, had to be cancelled because Torres is pregnant.

Ashley has been having difficulty getting fights and after successfully defending her title in Mexico against Maria Elena Villalobo in March, her camp has been looking for other suitable opponents. She said that she was elated when she got the news that Torres, an opponent that she had been eager to fight for a long time, had finally agreed to the contest.

Torres, who is the WBC Super flyweight champion, agreed to move up in weight class to make the fight happen and both women had gone into training for the match-up.

"I was so up for this fight and had a month of training under my belt already. I was so anxious for June to arrive, only to hear this news now that she is pregnant," Ashley told The Gleaner.

"Since there is nothing I can do about it, I have to wait now for my manager to find me another opponent," she added.

She then went on to say that her hope is to fight in Jamaica soon.

"Jamaica should know that female boxing is on the rise and we are going to the Olympics this year. I would really like to defend my title at home as we celebrate 50 years of Independence. I really hope that it happens," she stated.