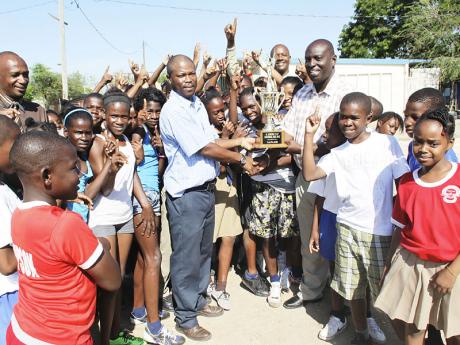 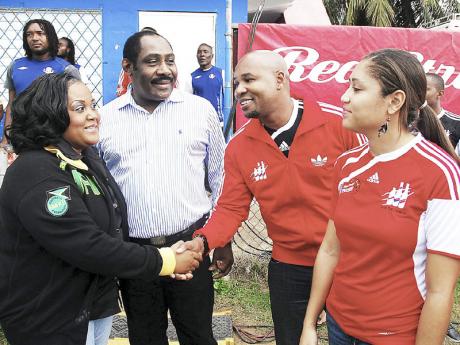 Rain played havoc with the second round of the Reggae Jammin Business House 50-over cricket competition last Sunday as only one of four games scheduled was completed.

AT MONA BOWL: Rain late in the afternoon thwarted the efforts of defending champions National Housing Trust (NHT) to beat Bank of Jamaica. BoJ batting first were skittled out for 80 in 21.4 overs. Oshane Wilson taking 5-21, Shawnlee Earle and Herman Henry two wickets each. NHT were going great guns at 66-1 when the showers arrived, with Wilson not out 41.

AT JAMALCO: Rain curtailed play in the match between home team Jamalco and Digicel. Jamalco 202 all out off 35 overs - former Jamaica player Maurice Kepple 84, Winston 'Sala' Osbourne 37; Garfield Morgan 2-17, Shevaughn Archer 2-18, Alrick Antroy 2-41. Digicel were unable to start their reply due to rain.

AT SPRING VILLAGE: The feature match between former champions Jamaica Broilers and LIME was rained out without a ball being bowled.

The competition continues tomorrow with five matches: NHT vs Jamaica Broilers in a replay of last year's final at Mico, JUTC vs Jamalco at José Marti, LIME vs Sagicor at Chalmers Avenue, NWC vs Red Stripe at National Water Commission playing field, Mona, and BoJ vs JNBS at UWI, Mona. All matches start at 10 a.m. Digicel will rest this weekend.

The Kingston and St Andrew Football Association Business House football season kicks off today with the Pronto Porridge Mix-sponsored one-day five-a-side rally at the Water Commission playing field, Mona, starting at 9 a.m. As many as 22 teams will participate, including defending champions Petrojam, who went on to win the Division I league title.

Two new teams have come aboard this season - Bank of Jamaica and National Continental Baking Company. The Division One and Two leagues will start on Sunday, May 20.

Mister C on top in skittles

In preparation for the upcoming Wray & Nephew skittles competition, two sets of friendly tournaments will be played tomorrow. The first of these takes place at Mister C and will involve the home team, Olympic Strikers, The Dip, and Lady Strikers.

The second tournament takes place at Rowe's Strikers, Molynes Road, and will see the home team, Eagles, Starliner, Waltham and Eastern vying for top honours. The Wray & Nephew White Overproof competition is expected to start in another two to three weeks.

In the other Division One match played, former champions The Gleaner found Jamaica Fire Brigade too hot to handle, going under 152-128 at The Gleaner Sports Club.

Prize money, sponsored by Image One as well as the South Central Confed Super League, will be handed over to New Green, winners of the 2011-12 football season.

A special ceremony will be hosted at the Golf View Hotel in Mandeville next Wednesday (May 16), starting at 6:30 p.m. This is the first time in recent years that a formal function as well as prize money is being offered to the top four teams. In addition to New Green, there are Rivoli United, Meadows and Newland.

The occasion will be used to showcase New Green's operations to the Mandeville business sector, according to Confed chairman, Dale Spencer.

New Green, the first-time champions, will begin their quest to qualify for the Red Stripe Premier League on Sunday, May 20.

The Captain's Bakery & Grill-sponsored Clarendon Major League football competition will be decided today with the final set of matches in its league format. Only two games are of consequence to the championship.

The one with most interest will be played at Four Paths, where the hosts require victory against Rock River to gain their first hold on the title. The second game will be hosted at Wembley between Jamalco and New Bowens.

With a one-point lead on Jamalco, victory would guarantee the league title regardless of Jamalco's fortunes against New Bowens at Wembley. Jamalco can sneak through and claim the championship providing Four Paths draw or lose.

Four Paths may not have things their own way as Rock River could prove dangerous, especially as the threat of relegation hangs around their neck. Gimme-Me-Bit, who have seemingly withdrawn without completing their fixtures, are almost sure to be relegated. Another team, Longwood, is poised for the drop, but they can pass on that noose to Rock River, providing they win against Woodhall at Turner's Oval.

At the start of the season, the names of Jamalco, New Bowens and Woodhall and Milk River were the ones bandied around as likely winners. The lead inter-changed between Jamalco the mid-season champions and New Bowens, the beaten finalists, several times. However both suffered unexpected losses to York Town, a team which will finish in mid-table.

The final legs of the semi-finals in the Wray & Nephew-sponsored St Elizabeth Major League football competition will be played this weekend. Appleton, who finished the preliminary round on top, are almost sure of booking their place in the final as they won 5-0 against Newell in last weekend's first leg. They will play their semi-final tie today in Black River at 3 p.m.

The other semi-final pits mid-season champions Black River against Tafari Lions. A draw will be good enough for Black River to advance as they hold a 1-0 lead, courtesy of a Kamar Walker 87th-minute strike. Their matchup will be hosted at the St Elizabeth Technical High School playing field tomorrow at 3 p.m.

Eradication booted favourites and top-seed Fort International 300-274, while second seed Ackee Pod were surprised 300-272 by Colours Sports Club. The fourth semi-finalists are Right Stuff , who downed Passagefort United 300-271. The semi-finals will be played on Sunday, May 20, at the same venue.

Naggo Head Primary turned back a strong challenge from Hydel Prep and retained their St Catherine Under-13 Athletics Championships crown at the G.C. Foster College recently.

Hydel topped the boys' section with 96.5 points, while Naggo Head topped the girls' section with 111.5 points. Ascot Primary's Class One boy, Kadez Sutherland, was adjudged Champion Boy with 19 points, even though he hadn't won an individual event. He placed fourth in the 400m in 1:00.89 seconds, a race won by Hydel's Jaise Foster in 59.22 secs; and second in the long jump with a leap of 4.57 metres, in an event won by St John's Keyshan Davis (4.94m).

It was sheer teamwork for Naggo Head, but two standout performances came via Everton Dennis, as he clocked 43.77 to win the 300m Class Two boys, and Kevin Smith, who ran an impressive 13.34 to take the Class Three 100m for boys.

Six teams down for U-13 League

Six teams are down to compete in the Leander Marshall-sponsored Portmore Under-13 football league, which kicks off tomorrow with a uniform parade and a triple-header at Ferdie Neita Park in Braeton, starting at noon.

The teams will play a round-robin format with the top four advancing to the semi-finals. The uniform parade starts at noon, as players meet and greet the officials of the league. In the first game, East Portmore Portals play Westchester at 1 p.m., Portmore United tackle last year's runners-up Cumberland at 2:30 p.m., while defending champs Wanderers clash with Daytona at 4 p.m.

An MVP-quality performance by Kanu Smith led Ascot Primary to their 15-7 (five innings) triumph over Kingston-based Dupont in the final of the pilot INSPORTS/Devon Whyte Baseball Tournament at the G.C. Foster College recently.

Ascot led 12-0 after three innings and cruised to the title. MVP for the final was Ascot Primary's Smith, who is a sharp fielder and hitter. He slammed six hits and batted in four runs in the final. The starting pitcher, Earon Elliott, was superb. He allowed only one run in four innings.

Coach of Ascot, Errol Mathias, said: "We dominated the competition from start to finish and I'm proud of the team."

Devon Whyte, a Jamaica-born Major League player in the United States who won the baseball World Series title on three occasions with two different clubs, was a patron of the pilot project.

The LIME St Catherine Football Association U-15 Football League kicks off with a double-header at Spanish Town Prison Oval this afternoon.

Defending champions Old Harbour Bay United, playing in Group A, will face off against Federal United in the feature match at 4:30 p.m, while in the curtain-raiser at 2:30 p.m, Group B teams Rivoli United and Village Linx will lock horns.

Four matches are also on tomorrow. In Group A, it's Flamingo vs Windsor Lions at Gordon Pen and Black Lion vs DB Basovak at Irish Pen; while in Group B, it's New Raiders vs Angels United at Fidco Oval, while the St Catherine Football Association U-15 team tackles De la Vega City at Spanish Town Prison Oval in the other match. All games begin at 4 p.m.

Minister without portfolio in the Office of the Prime Minister with responsibility for sport, Natalie Neita-Headley (left), is greeted by Jomo Cato (second right), head of marketing, Red Stripe, while Jamaica Football Federation president, Captain Horace Burrell (second left), and Erin Mitchell, brand manager, Red Stripe, look on, during the final round of the Red Stripe Premier League on Sunday, at the Portmore United-Waterhouse match at Ferdie Neita Park, St Catherine. The game ended 1-1 and Portmore United sealed the title to bring to an end a tremendously successful first-year league sponsorship by Red Stripe, which saw the first-ever Monday nights live televised match series.- Contributed