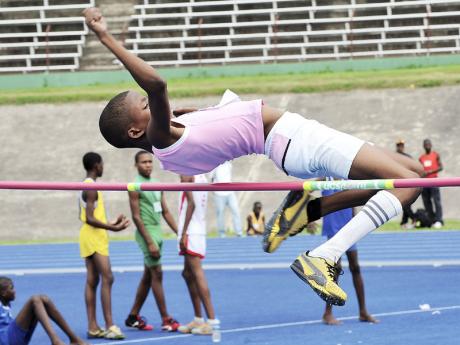 St Benedict's Primary hold a three-and-a-half point lead over their rivals going into today's final day of the four-day Swizzzle/Institute of Sports Primary Schools Athletics Championships at the National Stadium.

St Benedict's, who are seeking their first hold on the trophy, lead the standings after four finals with 19.5 points. They are followed by St Patrick's and Harbour View, who are on 17 points each, New Providence (13), defending champions Naggo Head and Ascot on 12 each, Portsmouth 11.5, Gregory Park and Clan Carty on nine each.

Andrew Betton of New Providence captured the boys' high jump open with a leap of 1.45m in front of Tadhjae Gordon of Portsmouth, who also leapt 1.45m. However, Betton was awarded the victory after achieving his winning mark on his second attempt, while Gordon leapt to his mark on his fourth attempt.

"I feel good because I had to do my best to win the event," said 12-year-old Gordon. "It was a challenge but I just followed what my coach said and so I was able to come out on top," said Gordon, who is an admirer of World 100m champion Yohan Blake.

Gregory Park's Sanique Rose won the girls' long jump with a leap of 4.62m, ahead of Shanacia Brown of Holy Family (4.52m) and Stancia Ward of Harbour View (4.50m).

"I feel very good," said Rose. "I am very proud of my achievement," she said.

Chairman of the government-run Institute of Sports, Don Anderson, lauded the sponsors for the continued support to the programme for the past decade, as well as the work of the INSPORTS management and staff.