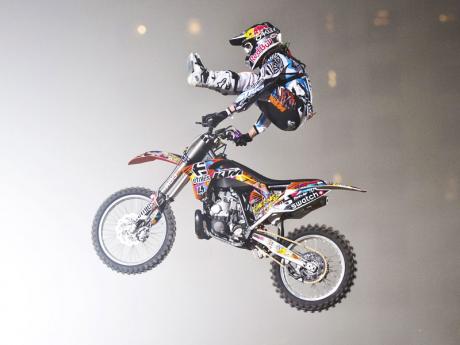 Levi Sherwood of New Zealand performs during the training of the first stop of the Red Bull X-Fighters World Tour in Dubai, United Arab Emirates, on April 11.-Contributed

ONTARIO, California:Only the brave will survive when today's battle for the second stage of the Red Bull X-Fighters World Tour takes place at the Glen Helen track.

It's the largest ever track constructed in the tournament's history and could prove a daunting task for the riders.

Cut out of steep hillsides in Ontario California Hills, 300,000 tons of dirt was used to create the imposing terrain, which could potentially consist of up to 100-foot long flips, should any brave rider be up to it. Instead of the traditional three or four options available to the motorcyclists for their tricks, Glen Helen has 24.

"This place is the most unique ever, it's a one-of-a-kind course," motorcross legend Ronnie Renner, who had a major impact on its design, explained.

The course, Renner says, was built to pay homage to the area credited with originating the sport, and expected fierce competition when the more than 30,000 fans pour into the venue today.

"You have to have a great strategy here. There are riders known as more ramp-oriented and those guys that are more accustomed to the natural terrain could have an advantage. The ramp-oriented riders could look a little tight."

However, despite having vast amounts of experience, the riders themselves seem to be a bit apprehensive about the scope of the Glen Helen landscape.

"I think maybe the next round will have most of the tricks. I will be looking to be solid and consistent to get some points on the table. The track is a lot bigger, somewhat dangerous. I don't think I'll push it so much just yet," New Zealand rider Levi Sherwood, winner of the tournament's first round in Dubai, told The Gleaner.

Last year's champion, Spain's Dany Torres, who was injured at the back end of last season, expressed similar sentiment.

"Well, it is huge and I have been feeling pain from my injury, so I will just be looking to get out there and be solid."

Following today's round of qualifiers, the riders will duel in pairs, with the individual that posts the higher score advancing to the next round. In yesterday's round, local boy Todd Porter was the most impressive over the rugged terrain. The rider impressively executed a high backflip, which saw him fly up the hillside to travel around 30 feet to the very top of the course. He was rewarded with a score of 85.10 and took the top spot.